A colorful crowd: Waxbill birds are small, gregarious, wildly colored birds of the Old World tropics. Waxbills are 107 or so species of finch-like birds that make up the family Estrilidae. They are largely seedeaters sporting short, thick, conical-shaped beaks; they add insects and fruits and berries to the menu throughout the year. Several species of waxbill have been domesticated and are kept as pets. The Zoo’s Africa Rocks experience will be home to the violet-eared, orange-cheeked, St. Helena, and lavender waxbills. Can you tell which is which?

Ranging in size from 3 to 6.5 inches (7.6 to 16.5 centimeters), waxbills come in a variety of colors and patterns. Whether it dons cheeks the color of pumpkins, wings the color of storm clouds, or a beak the color of lipstick, these chipper little birds are known as perching birds, which the arrangement of their toes—three pointing forward and one back—facilitates. This anisodactyl arrangement is a characteristic of the Passeriforme order of birds, which includes more than half of all bird species. Like most passerine birds, waxbills develop 12 tail feathers; male waxbills are usually more vibrant in color (especially during breeding season) than the females.

Habitat for these colorful little gems varies from sub-tropical/tropical wet scrubland, to open grassland and savannahs of western Africa. The orange-cheeked waxbill lives in flocks of 30 or more birds nesting close to or directly on the ground in tangled clumps of tall grass. Violet-eared waxbill frequents dry scrub, open woodland with a thorn understory, and sometimes vegetation along streams. Common waxbills can be found in marshes, swamps, open country with tall grasses, forest and woodland, bushes, and in reeds along rivers in savannahs, gardens, and sugar cane plantations.

The diet varies somewhat from species to species. The orange-cheeked variety eats the seed heads (panicles) of grass and forage at the roots for aphids, termites and other tiny insects. They even hang upside down from stems to eat! Waxbills favor tiny, protein-rich insects like aphids and a wide variety of insects especially during the breeding season. Some can catch insects in flight.

Lavender waxbills feed on the ground and in the trees and bushes on seeds, including those of small fruits, as well as nectar and pollen.

At the Zoo, they enjoy small-grained millets, mealworms, fruit flies, wax-moth larvae, and pinhead crickets as well as sprouted seed and greens like cucumber, chickweed, and dandelion.

Waxbills are diurnal birds and stay busy foraging, socializing, and nest building. Orange-cheeked waxbills nest on or near the ground in grass in colonies or in individual pairs. Violet-eared waxbills build a rounded nest of grass stems lined with feathers. The nest may have a side entrance that features a “porch” area. Common waxbills nest in clumps of grass, thornbush, and vine tangles. The lavender variety builds nests with a downward facing entrance tube and even a “cock’s nest” on top decorated with feathers and droppings to deter predators.

During breeding season, waxbills can become aggressive and territorial around their nest site. Males perform elaborate courtship displays by singing, flying, and strutting by the female. Lavender waxbill males even carry a piece of nesting material as he woos the hen. She responds with quiver of her tail; sometimes the female takes the initiative and displays for the male. Once united, the entrance to the nest is built with a downward-facing tube; they may also “decorate” it with bits of paper, feathers, clumps of earth, and even dead insects or deceased nestlings. They will make use of abandoned weaver nests, too. Both adults incubate the 4 to 6 eggs for 12 to 15 days while dining on insects like waxmoth larvae, aphids, and spiders.

The orange-cheeked waxbill has a different plan, nesting close to the ground in an area with lots of cover. They go so far as to build a “dummy nest” on top of the real nest to deter and confuse predators (this is sometimes called a cock’s nest, as the male uses it at night). They are known as “light sitters” and will abandon their eggs if disturbed.

Common waxbill parents will withhold food and call loudly at the nest entrance to encourage young to fledge at about three weeks of age. Waxbills usually live in pairs during the breeding season, but associate in mixed flocks outside this period.

The common waxbill (also called the St. Helena waxbill) makes various twittering and buzzing calls while also employing a distinctive, high-pitched flight call. Its song is considered “harsh and nasal” and descends on the last note. However, most Passeriformes produce beautiful and varied songs with rich, melodious phrases, with the exception of the raspy call of the Corvidae (crows and ravens).

Orange-cheeked waxbills are a favorite among bird fanciers, as the male’s song is beautiful for such a tiny (4-inch, or 10.2-centimeter) bird (females do not sing). There are no obvious visual differences between the sexes. They are considered happy, social little birds that get along well with other finches.

Lavender waxbills have a greeting display that entails alternately bowing to each other, regardless of the sex of the birds.

Waxbills tend to be cold sensitive and do not stay where the temperature dips below 65 degrees Fahrenheit (18 degrees Celsius).

A colorful collection of waxbills will be part of the Africa Rocks experience at the Zoo, which will open in 2017. Look for violet-eared, orange-cheeked, lavender, and St. Helena or common waxbills flitting about.

While many waxbill species are listed under “least concern” for conservation efforts, it is still important to protect habitat so the birds have room to flourish. For instance, the lavender waxbill is a common species of estrildid finch native to Central Africa, but as grasslands are converted to agriculture plots, the birds are forced into less-than-optimal areas.

Like most Passeriformes, predators such as birds of prey, mammals, snakes, and sometimes humans are threats to waxbills. Quick reflexes and fast flying can help them avoid most predators. They are not only vulnerable to human-induced habitat loss, but also are sometimes persecuted if they are perceived as a “nuisance” and a threat to crops.

Number of eggs laid: 4 to 7 per clutch

Age of maturity: First molt around 7 weeks of age

Lavender waxbills greet each other, regardless of sex, by alternatively bowing to one another. 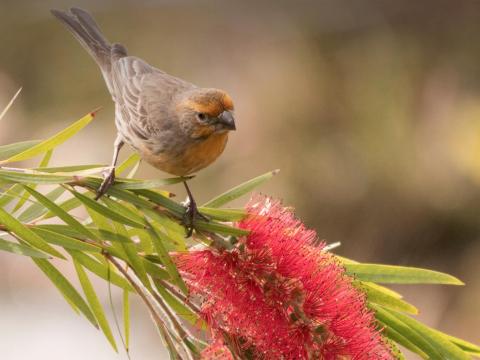 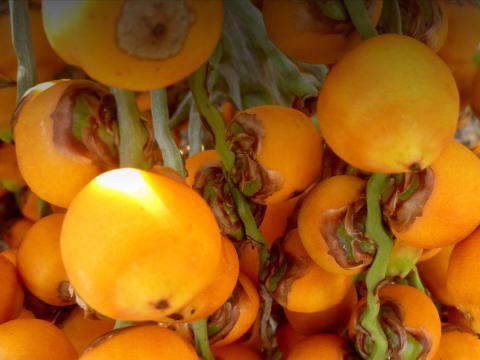