Unique primates: Lemurs are a type of prosimian, which means they are primates that evolved before monkeys and apes. They are more primitive than their cousins but share certain characteristics. Found in only one area on Earth—Madagascar and the nearby Comoro Islands—lemurs are considered the world’s most endangered group of mammals.

Today there are over 100 lemur species. Their lemur-like primate ancestor is thought to have rafted over to Madagascar from Africa about 60 million years ago. With no competition from other primates and little predation, the original lemurs evolved to fill a large number of varying niches on the island.

If you did not know what a lemur was, you might guess that it was related to a cat, squirrel, mouse, or dog. Lemurs are generally small in size, and their face somewhat resembles a mouse’s face in smaller species or a fox’s face in larger species. Many lemur species have a snout, and all have a wet and hairless nose with curved nostrils, which is unique among primates and makes them superior sniffers. They have five digits on front and hind limbs, and some species have longer hind limbs than forelimbs for jumping.

Their tail is not prehensile and varies in length, depending on the species. Lemurs range greatly in size from the mouse lemurs to the indri. Lemurs have bright round eyes and soft fur that varies in color, depending on the species. The most common lemur colors are white, gray, black, brown, and red-brown. In some species, males and females have different coloring. For example, in blue-eyed black lemurs, males are solid black and females are reddish-brown.

Lemurs that are diurnal (active during the daytime) ,are social and live in family groups or troops. They follow the safety-in-numbers idea, using alarm calls when a predator is spotted to inform the rest of the group. Nocturnal lemurs do not live in large groups, but have the cover of night to help protect them. And, some lemurs are active day and night. The primary predator of lemurs is the fossa, although they can fall prey to large boas, hawks, and introduced species, as well.

The aye-aye—one of a kind: The aye-aye is covered in coarse, black hair with white tips. It has a long, bushy tail and large radar-like ears. Its large incisor teeth are like a rodent’s in that they never stop growing. This allows the aye-aye to chew through tree bark and nuts to find grubs to eat.

The aye-aye has a specialized middle finger adapted for finding and pulling out grubs. This specialized finger is very thin and bare. It fits in small holes that the aye-aye has gnawed. With its sensitive ears, an aye-aye can hear grubs moving under bark and then tap its middle finger on the tree until it finds the right spot to pry open.

Sifakas—leaping lemurs: Sifakas have more human-like proportions than other lemurs, with rather short arms and long legs. This helps them leap confidently between trees that are more than 20 feet apart. Sifakas are not as graceful on the ground, and when crossing open ground, they bound along on their back feet while in a vertical position. The Malagasy name sifaka comes from their distinct call that sounds like “shif-OCK.”

The habitat of lemurs and the terrain they live on varies greatly. Madagascar has a high mountain range running down its center, which has created several different climate areas. The east is wet, the west dry, and the south even drier. The plant life in these areas grew based on the rainfall, and lemurs evolved to fill the various niches, from rainforests to semi-deserts.

The Alaotran gentle lemur Hapalemur alaotrensis is even more specialized than others. It has adapted to live its life in the marshland habitat surrounding a lake in the eastern region of Madagascar. It spends its days moving through the area on reeds and papyrus stalks as well as feeding on them.

Most lemurs spend their time up in the trees, resting, sleeping, feeding, and even giving birth. The ring-tailed lemur, however, spends a good portion of its day on the ground. Lemurs tend to move on all fours, and their hands and feet are adapted for life in the trees. The pads on their hands and feet help lemurs stick when they jump onto something. Depending on their size, lemurs may make their home or sleeping spot in the fork of a tree, a tree hole, or a leaf nest. 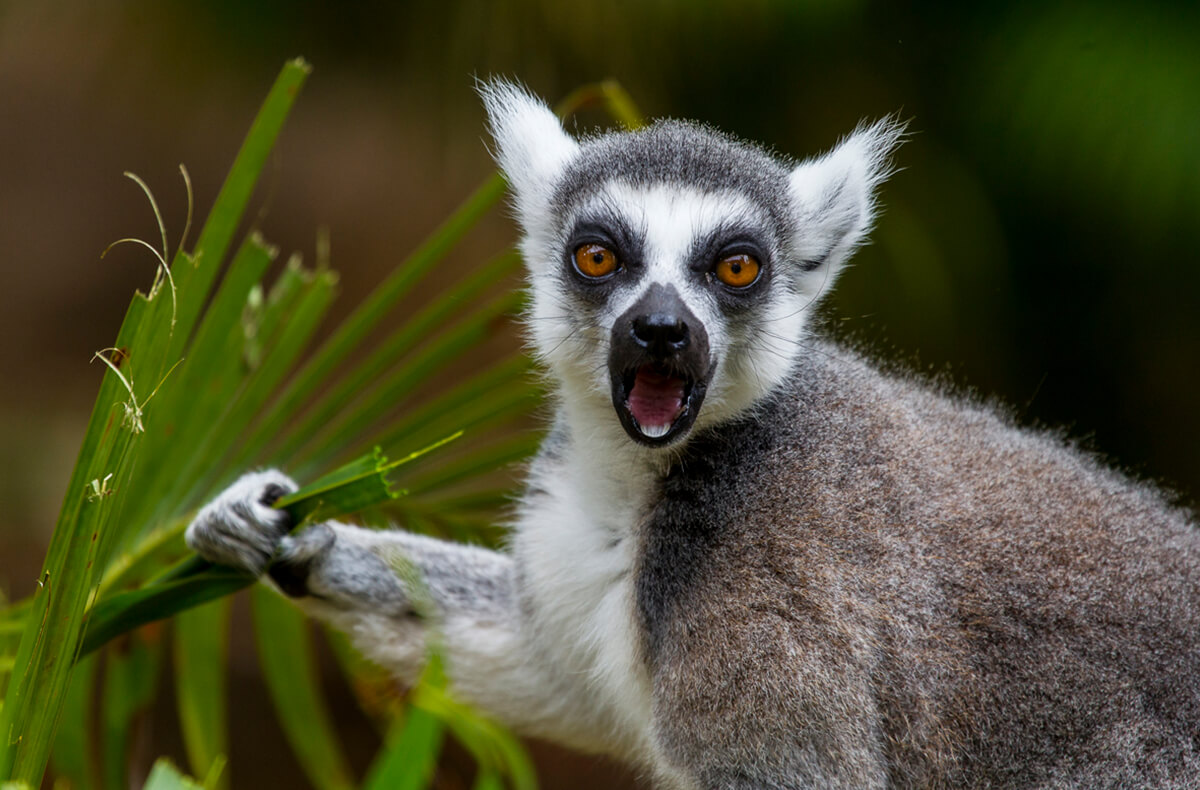 The diet of lemurs varies among species. Often the smaller lemur species feed primarily on fruit, insects, or sap, while larger species are mostly herbivorous, chowing down on plant material such as fruits, leaves, flowers, nectar, shoots, and bark.

Lemurs living in social groups take their lead from the dominant female. She decides where and when the group will move. In between eating and resting, lemurs may spend their time sunbathing or grooming each other. Compared to most primates, lemurs have different tools for this activity. They use an elongated nail on the second toe, called a grooming claw, and finely spaced teeth, referred to as a toothcomb, for grooming.

All lemurs have a defined breeding season, which lasts from a few days to a few months, depending on the species. The number of offspring varies among species and can range from one to six (one is more typical). For many species, infants cling to the mother’s belly for the first three to four weeks of life and start to gradually spend more time riding on Mom’s back. At three to four months of age, the mother encourages her babies to find alternative methods of transportation.

Lemur babies usually begin to try solid foods when three to four weeks old and are weaned at five to six months. For some species, such as the gray mouse lemur, infants are not able to grasp onto the mother, so she carries them in her mouth when she moves them. Some lemur species have an unusual way of caring for their infants: they make a nest and then later park them on a small branch in dense vegetation. This keeps the little ones hidden from predators while the mother forages. This method of care works for about a month—by then, the babies are mobile and not interested in staying put any more!

Lemurs communicate primarily through scent and vocalizations. Their sounds vary by species and can include grunts (brown lemurs and sifaka), loud alarm calls and sounds that sound like the mewing of a cat (ring-tailed lemurs), chirps (mouse lemurs), and wailing calls that are reminiscent of whale songs (indri). Lemurs rely heavily on their sense of smell and leave scent markings to communicate with each other, too.

The method of communication used the least are physical signals. Lemurs lack many of the facial muscles other primates use to communicate with facial expressions.

Extinction crisis: The unique lemur species of today were able to evolve due to their isolation on the island of Madagascar. Since the arrival of humans on Madagascar about 2,000 years ago, at least 17 lemur species have gone extinct. The largest, Archaeoindris fontoynontii, was the size of a gorilla and weighed over 400 pounds (180 kilograms).

The conservation status of all lemur species ranges from vulnerable to critically endangered. For example, the northern sportive lemur Lepilemur septentrionalis has just 18 individuals left that we know of. The reason for the decline in lemurs is primarily due to habitat loss and hunting.

Lemur habitats are often cut down for illegal logging and forest clearing for agriculture and mining. Lemurs are often hunted for food, and the aye-aye faces even more pressure from hunting; due to their bizarre appearance, many people in Madagascar regard the aye-aye as an omen of sickness, death, or evil. Lemurs also are at risk from invasive species such as dogs and cats that have been introduced by humans. To save lemurs, what is left of their forest habitat needs to be protected.

Madagascar is a biodiversity hotspot and, therefore, a popular location for ecotourism. When people travel to the island to see the distinctive and amazing wildlife, their visits help support local people, and this can encourage locals to save the forests for ecotourism purposes.

Even if you are unable to visit Madagascar, you can help these incredible endangered species and diverse habitats of the island. By supporting San Diego Zoo Wildlife Alliance, you are our ally in saving and protecting wildlife worldwide.

Number of young at birth: 1 to 6; smaller species tend to have more offspring

Age of maturity: 1 to 3.5 years, depending on species

Smallest: The Madame Berthe’s mouse lemur Microcebus berthae was described in 2000 and is small enough to fit in a teacup. It is about 3.5 to 4 inches (9 to 11 centimeters) plus a 5-inch (13-centimeter) tail, and weighs just 1 ounce (30 grams). It may be the smallest primate in the world.

The blue-eyed black lemur is the only primate other than humans to have blue eyes.

A black-and-white ruffed lemur mother makes a nest for the birth and care of her babies, lining it with her own hair.

A whole family of mouse lemurs (mother, father, and two to three young) could fit neatly in the palm of your hand.

The name lemur is from the Latin lemurs, meaning "spirits of the dead." This name was selected for the lemur’s silent movement.