Your gift not only cares for countless animals and plants at the Zoo and Safari Park, it protects and saves critically endangered species around the globe relying on us to survive.

Discounts and offers vary by membership type and cannot be combined. Gift recipients must reside within ZIP codes 91900-92899. Memberships valid through 12/31/2021.

Seeing red—pandas! Many people admire the red panda for its charming, kitten-like face, cinnamon red fur, fluffy ringed tail, and astonishing agility. The black-and-white giant panda may have worldwide popularity, but the bewitching and arboreal “other bamboo eater” has its own allure. Surprisingly, red panda fossils have been discovered in North America that date as far back as 5 million years. Today, however, red pandas are only found in small, isolated mountain territories above 4,000 feet in China, Nepal, India, Bhutan, and Burma.

It may seem like the roly-poly giant panda was the first true panda, and the red panda was added for fun. But French zoologist Frédéric Cuvier first described the western red panda Ailurus fulgens fulgens in 1825, 48 years before the black-and-white bear was cataloged. After examining a red panda, he said it was the most beautiful animal he had ever seen and named it Ailurus (from the Greek word ailouros, which means cat, and fulgens, meaning fire-colored or shining. In 1897, F. W. Styan discovered another form of red panda and named it Ailurus fulgens styani, now refulgens. The Styans' panda is a bit larger and more brightly colored than the western red panda.

So how did this Asian animal come to be called a panda? The origin of the name “panda” is unclear. Many people believe it derives from the second part of an old Nepalese name for these animals, nigalya ponya, which may have meant something like "bamboo footed.” Another local name for the red panda is wah or chitwah.

Classifying animals is not an easy task, and scientists have argued for years over red pandas and giant pandas: are they related to each other? Red pandas and giant pandas share a common ancestor that lived millions of years ago. Yet because of the giant panda’s larger size, some biologists came to write about red pandas as “lesser” pandas. For many years, red pandas were classified as part of the Procyonidae family, which includes raccoons and their relatives. But DNA studies show that red pandas represent a unique family that diverged from the rest of the Carnivore Order, and scientists place them in their own unique family: Ailuridae.

Living the high life: With their bushy tail for balance—which can be as long as their body—and claws for gripping, red pandas are definitely acrobatic tree dwellers. Most of their time is spent in trees, and the red panda’s cinnamon red coat, occasionally saddled with orange or yellow, and soft cream-colored face mask give great camouflage among the red moss and white lichen that cover the tree trunks of their bamboo forest homes. Below each eye is a band of color that varies from tan to red to black. The legs and belly shade to black in striking contrast to the red body, and the tail is fully furred and more-or-less banded, with rings on some individuals being more pronounced than on others.

Trees are also used as a perch for sunbathing high in the forest canopy and give red pandas an escape route from predators such as snow leopards and dholes. To descend, red pandas climb down headfirst, gripping the trunk with the hind claws.

Red pandas live mostly in cool, temperate forests with a shrubby understory dominated by thick bamboo. They prefer habitats with plenty of fallen logs, tree stumps, and fresh water. In part of India, red pandas live in a tropical forest.

Don't look for any red panda activity during the day: they usually move around at dawn and dusk, sleeping during the hottest part of the day. They begin their “day” by licking the front paws and then cleaning the fur all over the body in a cat-like, sitting posture in the tree. Red pandas "wash" their face with fore and hind paws. You might see one at the Zoo stretched out on a tree branch or even rolled up in a tree hollow with its long tail covering the face. When night falls, red pandas run quickly through the trees to forage for food. Males patrol their territory and scent mark it with urine as well as a secretion from the anal gland during this time.

Claws are for climbing, of course, but this mild-mannered animal can defend its territory by standing on its hind legs and using those sharp claws to strike out if threatened. If that doesn't work at keeping enemies at bay, the red panda can release a strong odor from scent glands at the base of the tail that may make a predator think twice about a red-panda meal.

Red pandas have powerful molars for chewing on tough bamboo and are mostly vegetarians—although they are classified as carnivores. Bamboo is not a great food source for energy and is hard to digest. In fact, red pandas digest only about 24 percent of the bamboo they eat. Red pandas need to eat 20 to 30 percent of their body weight each day—about 2 to 4 pounds (1 to 2 kilograms) of bamboo shoots and leaves. In one study, female red pandas were found to eat approximately 20,000 bamboo leaves in a single day.

If 90 percent of your diet is made up of bamboo leaves, it could seem like you lost a bet. But bamboo is a pretty practical food source, as it grows fast and wild on mountainsides and few other species are going to fight you for this low-calorie resource. Red pandas eat mostly bamboo leaves and shoots, acorns, and flowers. Bamboo stalks are eaten in the spring and fruit is enjoyed in the summer. They may also eat eggs, small birds, and small rodents.

A red panda’s habitat may include up to 40 species of bamboo, but the animals select only one or two of the most nutritious species to eat. While giant pandas bite off large chunks of bamboo stems and leaves in one bite, red pandas daintily nibble one well-chosen leaf at a time. Large, strong chewing muscles and flattened teeth are adapted for chewing bamboo.

Eating a specialized diet like bamboo happens to be very unusual among mammals. In fact, only a few species depend mostly on bamboo for their food: red pandas, giant pandas, bamboo lemurs from Madagascar, and bamboo rats from China and Southeast Asia. Red pandas might spend about half of their waking hours foraging for bamboo.

Like raccoons, red pandas dip their paws into water when needing a drink. Like giant pandas, red pandas have a wrist bone that works like a “false thumb” to help grasp bamboo shoots. At the San Diego Zoo, the red pandas are fed leaf eater biscuits, dry dog food, grapes, apples, yams, and, of course, bamboo.

Breeding season takes place from January through April. During this time, red pandas come together in small groups, and cubs or adults may engage in social play that includes lunging, wrestling, and biting.

Like the giant panda, the red panda female is fertile for only one or two days a year, and there is a period of delayed implantation when the fertilized egg doesn’t implant or develop right away, possibly to ensure that cubs are born in the summer when their chances for survival are best. Just a few days before giving birth, the expectant mother begins to build a birthing den in a hollow tree, stump, or rock crevice, lining it with twigs, leaves, grass, moss, and small branches.

The young are born with thick buff and gray fur and with their eyes and ears tightly closed, so the protection of the den is very important. Mom keeps her cubs hidden in the den, and for their first 7 to 10 days, the cubs’ only activity is nursing. Hungry cubs get Mom’s attention with high-pitched whistles. They usually begin opening their eyes and ears at 2 to 3 weeks of age and nurse until 13 to 22 weeks old. Their wooly, gray hair changes to red at this time. The red panda mother shelters her young in tree hollows and regularly moves them to new dens, carrying her offspring in her mouth.

By the time cubs are 40 to 50 days old, they are actively exploring the den, grooming, and playing. They begin chewing on bamboo twigs their mother brings to the den, although they won’t regularly eat solid food until they are four months old. Cubs venture from the den when about three months old. By five months of age they are almost as large as their mother. They mature in 18 to 20 months and are driven away by their mother at that time so she can get ready to raise her next litter. Males rarely help with raising the young.

The soles of the newborn's feet are bare, but as an adult the feet are covered with hair to help the red panda climb on wet, slippery branches and walk on icy rocks or snow-covered ground. As the baby grows, its short, fat tail becomes beautifully ringed and grows to be almost as long as its body. This long tail helps the animal keep its balance in the trees.

Our first red pandas (four of them) came to the San Diego Zoo in 1940, and 30 births were recorded between 1941 and 1954! We have maintained both subspecies over the years, although we’ve only had breeding success with the western red pandas, the most recent litter being born in 2006. Our red pandas can be seen at the Zoo's Asian Passage.

Red panda numbers may have decreased by as much as 40 percent over the last 50 years. Today the adult population is probably around 10,000 animals. People clearing forests for farming and grazing, as well as hunting and the pet trade, have drastically reduced the number of red pandas—some estimate that only 2,500 adult red pandas remain in the wild. Red pandas are hunted for their pelts, which are made into fur capes and hats. Sometimes, red pandas are caught in snares set out for wild pigs, deer, and takins.

On the positive side, there are now worldwide efforts in place to save red pandas. Some habitat has been designated as protected areas. There are 20 such protected areas in India, 35 in China, 8 in Nepal, and 5 in Bhutan. San Diego Zoo Global supports the Red Panda Network, a nonprofit organization that identifies unprotected red panda habitat and trains “forest guardians” to conduct awareness-building workshops on red pandas at local villages and work with villagers to establish new protected areas. Forest guardians also continue baseline research and monitoring of red panda populations.

At the San Diego Zoo, our red pandas serve as excellent ambassadors for their species, and we hope they motivate our guests to help save wildlife. San Diego Zoo Global participates in the Association of Zoos and Aquariums’ Species Survival Plan (SSP) for red pandas. The mission of an SSP program is to cooperatively manage threatened or endangered species populations within managed-care facilities. Working together, we can save this beautiful and appealing animal.

The Chinese name for the red panda is "hun-ho," meaning "fire fox."

Almost half of the red panda's total body length is in its tail. 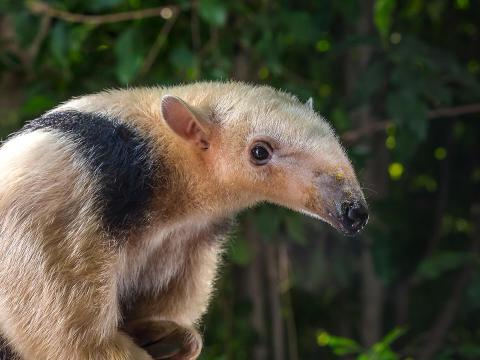 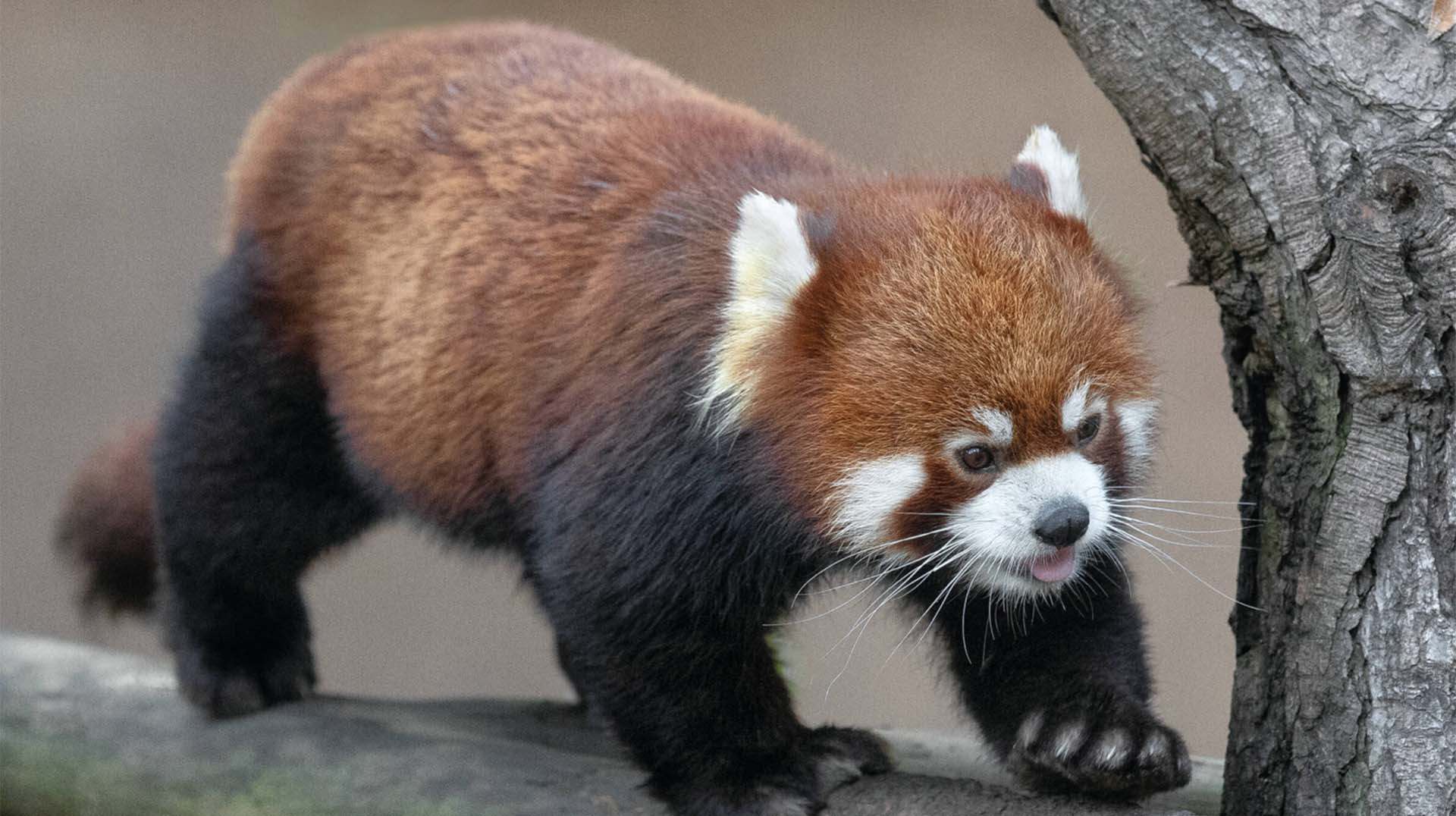 The Panda in Red

Beautiful and endangered, red pandas are the focus of ongoing conservation efforts...