Have you ever heard someone refer to a koala as a "koala bear?" Well, like bears, koalas are mammals, and they have round, fuzzy ears and look cute and cuddly, like a teddy bear. But koalas are not bears. They are members of a group of pouched mammals called marsupials. Marsupials include kangaroos, wallabies, wallaroos, wombats, possums, and opossums. Koalas look soft, but their fur feels like the coarse wool of a sheep. They also seem cuddly, but koalas are not tame, and they don't make good pets.

Koalas are native to southeastern and eastern Australia, living in forests of eucalypt trees. They need to sleep a lot to give them time to digest their food. Being on the ground all the time would be a disadvantage, because predators could catch them easily. Instead, they adapted to live way up in eucalypt trees, rear end firmly planted in the fork of branches, so they can chew leaves and nap all they want to without feeling threatened.

Eucalypt forests are home, shelter, and food for koalas. Koalas are adapted for living in the crooks of branches: they have a reduced tail, a curved spine, and a rounded rear end. But they do travel on the ground when necessary, to get from tree to tree or to a new area. On hot days, koalas select the coolest trees and the coolest locations in those trees (against the trunk and other low, shaded branches) for resting. On cooler days, koalas are more likely to rest farther away from the trunk where they can absorb heat from the sun.

Koalas have few natural predators, although sometimes a dingo or large owl can take one. The most common direct causes of koala deaths are from motor vehicles and dogs. Koalas are definitely safest high up in trees.

Koala hands and feet are adapted for curling around and hanging onto tree branches very effectively. Their hands have two opposing thumbs to increase their grip (we only have one), and sharp claws to dig into bark. The feet have a toe that is really two toes fused together, which they use to groom themselves, and a toe that doesn’t have a claw that acts like a thumb for gripping. Rough, ridged pads on the hands and feet aid their grip and give them traction. Strong arm and shoulder muscles help a koala climb 150 feet (46 meters) to the top of a tree and enable it to leap between branches in the trees.

Koalas are naturally solitary. They are most active at night and spend most of their time napping and eating. Koalas eat only eucalypt leaves. Eating leaves from one kind of plant may seem boring, but there are more than 600 different kinds of eucalypt trees, and from a koala’s point of view, each looks and tastes very different! Koalas prefer the leaves of about three dozen varieties.

Like many plants, eucalypts make certain toxic compounds as adaptations for avoiding being eaten. Most herbivores can’t tolerate eucalypts because of these compounds, but koalas specialize in it! They’re coadapted to be able to ingest these toxins—at least in certain kinds of eucalypts. But koalas seem to know their limits. Conservation scientists noted that koalas avoided certain plants seasonally. Analyses of the plants revealed higher-than-usual levels of certain toxins.

Koalas grind the tough eucalypt leaves with their cheek teeth. They don't get many calories from their diet, but they conserve energy by moving occasionally and by sleeping as much as 20 hours each day.

At the San Diego Zoo, koalas are offered fresh branches from several kinds of eucalypts each day. These picky eaters can then select their favorite varieties. Our koalas eat 1 to 1.5 pounds (454 to 680 grams) of leaves each day.

A koala, like other marsupials, begins life in a very unusual way. When it is born, it is only about the size of a large jelly bean and is not yet fully developed. In fact, a newborn joey can't even see or hear, but it sure can climb! Soon after the joey is born, it uses strong forelimbs and hands to crawl from the birth canal into its mother's pouch. The joey attaches to one of two nipples in this warm, safe place where it drinks milk and grows during the next six months.

Even after it starts leaving the pouch, a joey returns there when it wants to hide or sleep. Sometimes it rides on its mother's belly. After it grows too large for the pouch, the joey climbs onto its mother's back and holds on with strong hands and feet. After about a year, it can live alone in the trees.

Koala joeys learn to eat eucalypt leaves on their own gradually. At first the joey goes after leaves with its mouth. Its early attempts look like a game of bobbing for apples, with its nose getting in the way and pushing the leaves out of reach! Fortunately, joeys keep trying until they are successful. Eventually they figure out how to grab leaves with their hands and put them in their mouth.

Wildlife care specialists at the Zoo say that each koala has a unique personality. Koalas make several different vocalizations, from snores to bellows to screams. Our conservation scientists are trying to understand why male koalas bellow. Is it to tell other males to stay away or to invite females to visit? The bellow sounds like a mixture of a motorcycle revving and a pig snorting!

The male koala has a bare patch on the chest where his scent gland is located. The male rubs that spot against a tree trunk or branch to mark it with his special smell. We’ve found more than 35 chemicals that make up the scent. We took samples from the males at different times of the year to see if the scents changed and discovered that male koalas are smelliest in spring, when they would be trying to attract a mate.

With their bemused expressions and adorably rounded bodies, it’s no wonder that koalas have climbed their way to the top of the “must-see” list for many of our visitors. People love the koalas’ teddy bear appearance, but our koala care specialists consider them complex and sometimes challenging little creatures with a wide range of personalities and attitudes. Their sole sustenance is eucalypts, making them hard for many zoos to keep, but perfect for San Diego, as our climate is great for growing the tall, fragrant trees. We have our own browse farm, where we grow and harvest fresh eucalypts for our koalas to eat.

The San Diego Zoo received its first two koalas in 1925, as a gift from the children of Sydney, Australia, to the children of San Diego. They were named after characters in a famous Australian children’s story by May Gibbs—Snugglepot and Cuddlepie—and were soon major celebrities. Over the next 34 years, the Zoo received koalas in 1928, 1951, and 1959, but it was not until 1960 that the first koala was born here. It was such a momentous occasion that the Zoo received the Association of Zoos and Aquariums’ Edward Bean Award for the Most Notable Birth for the first birth of a koala in the US.

Our Australian Outback habitat opened in May 2013. It's a wonderful habitat for our large koala colony, as well as for other Aussie wildlife. The koalas can be seen along spacious walkways around a Queenslander-style “house” that serves as the koala care center, where you can see wildlife care specialists preparing eucalypt browse for the koalas. Because male koalas can be territorial, they have their own perches in one area, while the more social females and their babies, called joeys, share another area. The elevated walkways bring you to eye level with the koalas as they perch in their forest of eucalypts. Human children can practice their koala climbing skills on a play structure that features life-size koala sculptures.

The koala is one of Australia’s most recognizable symbols, but its survival hangs in the balance. Formerly thought to be common and widespread, koalas are now vulnerable across much of its northern range. Despite their broad appeal, significant gaps in our knowledge of koalas remain that create big challenges for the conservation of koalas and their habitat.

In the past, koalas were killed for their coats. In fact, from 1919 to 1924, eight million koalas were killed. Today, the koala is threatened by predation from domestic dogs and a disease that has spread through most of the population. In addition, some koalas get run over by cars. But the one thing that koalas and other wildlife can’t protect themselves against is the loss of their habitat. A combination of cooperative managed-care programs, conservation work, and support for habitat protection projects are needed to ensure the survival of koalas.

We also strive to learn more about koalas. We have a conservation scientist studying a group on St. Bees Island, off the eastern coast of Australia, trying to learn how much land koalas need to find enough food and shelter and what their vocal communications may mean. Putting all the pieces together has provided a much deeper understanding of koala breeding biology. Our work has resulted in the Australian government declaring St. Bees a national park to further protect the koalas that live there.

Yet a primary objective of our koala conservation program has been to contribute to the successful conservation and management of koalas across their entire range, not just on St. Bees. As we have developed our knowledge base, we are proud to have achieved this goal. By investigating the seasonality of koala births on St. Bees and applying our knowledge to other sites, we have discovered a significant relationship between koala births and rainfall in central Queensland, Australia. This finding is crucial to understanding the impacts of climate change on Australian wildlife and has highlighted the key factors needed to protect koala habitat and plan for the long-term future of koalas in Australia. There is still plenty of work to be done!

Here at the Zoo, we’ve learned over the years that female koalas are choosy about mate selection. We can’t just pair koalas because they make a good match genetically! Ongoing conservation science with our Zoo koala colony iincludes examining male traits, such as scent and sound, in order to examine the effects that they may have on female mate choice and reproduction.

Since 1983, San Diego Zoo Wildlife Alliance has shared koalas with zoos around the world through our Koala Loan Program. To make sure the traveling koala is comfortable, a koala care specialist accompanies it to its new home and stays there until the koala settles in. These furry travelers are so important they don't get checked into the baggage hold—instead, they often travel first class! If eucalypts do not grow well at the koala's new zoo home, fresh eucalypt branches are shipped to them from our zoo twice a week. These koala loans allow thousands of people to get to know—and care about—these unique marsupials. Koalas in Australia benefit from the loan program, too; funds from this program are donated to koala habitat conservation in Australia. 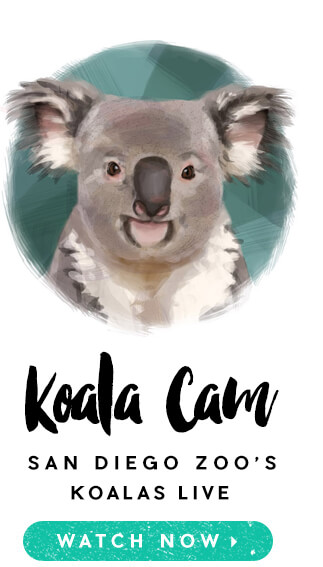 Koalas keep their coat clean by using a grooming claw rather than licking the coat.

Koalas eat a little dirt now and then to help them digest their eucalypt leaf meal.

To conserve energy, koalas sleep 18 to 22 hours a day.

In Australia, fossil findings of a prehistoric koala from 100,000 years ago indicate that koalas may have once been the size of a full-grown bull.