The western sword fern is native to western North America and is known for its bright green, tapered, 2- to 3-foot-long (61- to 91-centimeter) fronds. It gets its common name from the frond shape and because each leaflet of the fronds is dagger shaped, with toothed edges and a base that looks somewhat like a sword hilt. The western sword fern is one of the largest evergreen ferns and one the most abundant fern types found in its habitat.

Like other species of the genus Polystichum, western sword ferns are at home in the mountains, but they can also be found growing along the forest floor in temperate areas. They are a hardy species, and although they prefer cool temperatures and consistent moisture, they can survive dry periods. The plants grow in separate, individual clumps, but they often form extensive populations that can cover large areas and consist of thousands of individuals.

This fern species’ dark green fronds are densely packed on its rhizomes and form a round base, so the fronds typically grow in a circular pattern. The stipes curve up and out from the base, and the fronds arch outward, forming a crown.

The fronds are single pinnate, with the pinnae alternating on the stalk. Individual fronds live for about one to two years then die back; they remain attached to the rhizomes after withering. The round sori containing the spores are found in two rows on either side of each frond pinna. They produce light yellow spores.

Western sword fern rhizomes are short, woody, and scaled, often covered with old stipe bases. They have hairlike extensions on their scales, especially the petiole scales, called cilia, a distinguishing characteristic of Polystichum.

Western sword ferns are considered one of the “hardy ferns.” They grow best in well-drained, acidic soil of rich humus and small stones, with consistent moisture and light sunlight and cool temperatures. However, they can survive occasional dry periods, and once established, they can even make it through drought, only a little worse for wear and able to recover.

An Accent in Your Bouquet

The western sword fern is used extensively in landscaping and in floral displays. The evergreen leaves keep well in cold storage and are often exported from the United States to Europe.

This fern species is sometimes called the giant holly fern because its fronds remain a deep, glossy green through the winter. 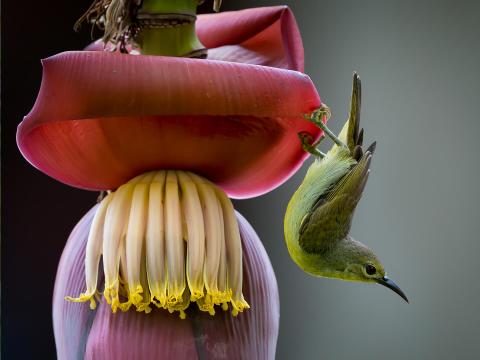