They're big, they're hairy, but are they scary? Not when you get to know them! Tarantulas are the biggest spiders in the world. They are also known as baboon spiders in Africa and hairy spiders in South America. But don't be alarmed! Most tarantulas are busy minding their own business. If you don't bother them, they won't bother you.

Like all spiders, tarantulas have two body segments—a cephalothorax (seff-a-la-THOR-ax) and abdomen—and very strong jaws with venomous fangs. Their legs (all eight of them!) are covered with tiny hairs. Many tarantula species use their legs to flick special hairs, called urticating hairs, off their abdomens when disturbed. These hairs are barbed and lodge in the eyes and mucous membranes of would-be attackers, causing great discomfort and irritation. Tarantulas from Asia and Africa do not have urticating hairs, so they have to use more aggressive posturing when threatened.

Tarantulas live in warm areas around the world—on all continents except Antarctica—but most are found in South America. Their preferred habitats are rain forests, deserts, and scrubland. Like other spiders, tarantulas make a silken web, but not for snaring prey. The web is used to make a home, a molting “mat,” or to aid in handling food items. Some tarantulas live in underground burrows in well-drained soil. If the soil is suitable, the spider digs a deep burrow and lines it with silk webbing; this helps keep sand and dirt from trickling in. Some tarantulas live on the ground under rocks, logs, or the shed bark of trees, and others live in webbed burrows in trees. These large spiders are solitary creatures, so there is only one spider per "house."

Tarantulas are nocturnal hunters, preying on a variety of insects, other spiders, and small lizards, snakes, and frogs. They rely on ambush and pursuit to catch their prey with a bite from their fangs. The fangs release venom that kills their victim; a chemical in the venom helps dissolve the victim's flesh. Tarantulas can also crush their prey using their powerful mouthparts. Though people are often afraid of tarantula bites, the reality is that most have venom with potency comparable to that of a bee. And remember, a tarantula would rather hide from you than bite you.

At the San Diego Zoo, our tarantulas are fed crickets, roaches, pinky mice, and small lizards.

Willing to die for love: Once mature, a male tarantula abandons his burrow to seek a female by following the scent she leaves. The pair performs a courtship dance and then, if the male is deemed suitable, they mate. Males of many tarantula species have spurs on their first pair of legs to hold back the fangs of their chosen partner while they mate—just in case! Lucky males usually die a few months after mating, but females may live and produce eggs for 25 years or more.

The female makes a silk cocoon in her home for her eggs. Once the eggs are laid (from 75 to 1,000!), she seals up the cocoon with silk and then stands guard for 6 to 9 weeks until the young hatch. They go off on their own when they are two to three weeks old.

All tarantulas have a hard exoskeleton that they must shed during each growth spurt. When the time comes, the tarantula lays down a silken mat with its spinnerets and flips over onto its back. The old exoskeleton opens on the back, and the tarantula must push it off by expanding and contracting its body. When the process is complete, and the spider has allowed some time for the new exoskeleton to harden, it flips back over. At first glance, the shed often looks like another spider! Young tarantulas molt several times over the first few years as they get bigger.

Tarantulas are currently off exhibit at the San Diego Zoo, during construction of the new Sanford Children's Zoo.

Many tarantula species have been over-collected in the wild for the pet trade and are protected by the Convention on International Trade in Endangered Species (CITES). The Zoo is a refuge for a large group of tarantulas confiscated by the U.S. Fish and Wildlife Service from an illegal smuggling sting.

Although spiders are fearsome predators, others often eat them. Tarantulas have many natural enemies in the wild, including lizards, snakes, spider-eating birds, and even wasps. A female tarantula hawk (a large, solitary wasp) can find a tarantula, sting it, and then drag its stunned body to a special burrow that she has prepared. Once inside the burrow, she lays a single egg on the body of the living spider. When the larva hatches, it eats the tarantula!

Females live up to 25 years in managed care; males typically live 5 to 7 years

Incubation period: 6 to 9 weeks, depending on species

Tarantula venom may have medicinal use in treating blood clots.

Spiders cannot eat solid food, so they pump digestive fluids into their prey and suck up the liquids.

The king baboon spider makes a hissing sound by rubbing together structures on its mouthparts when threatened. 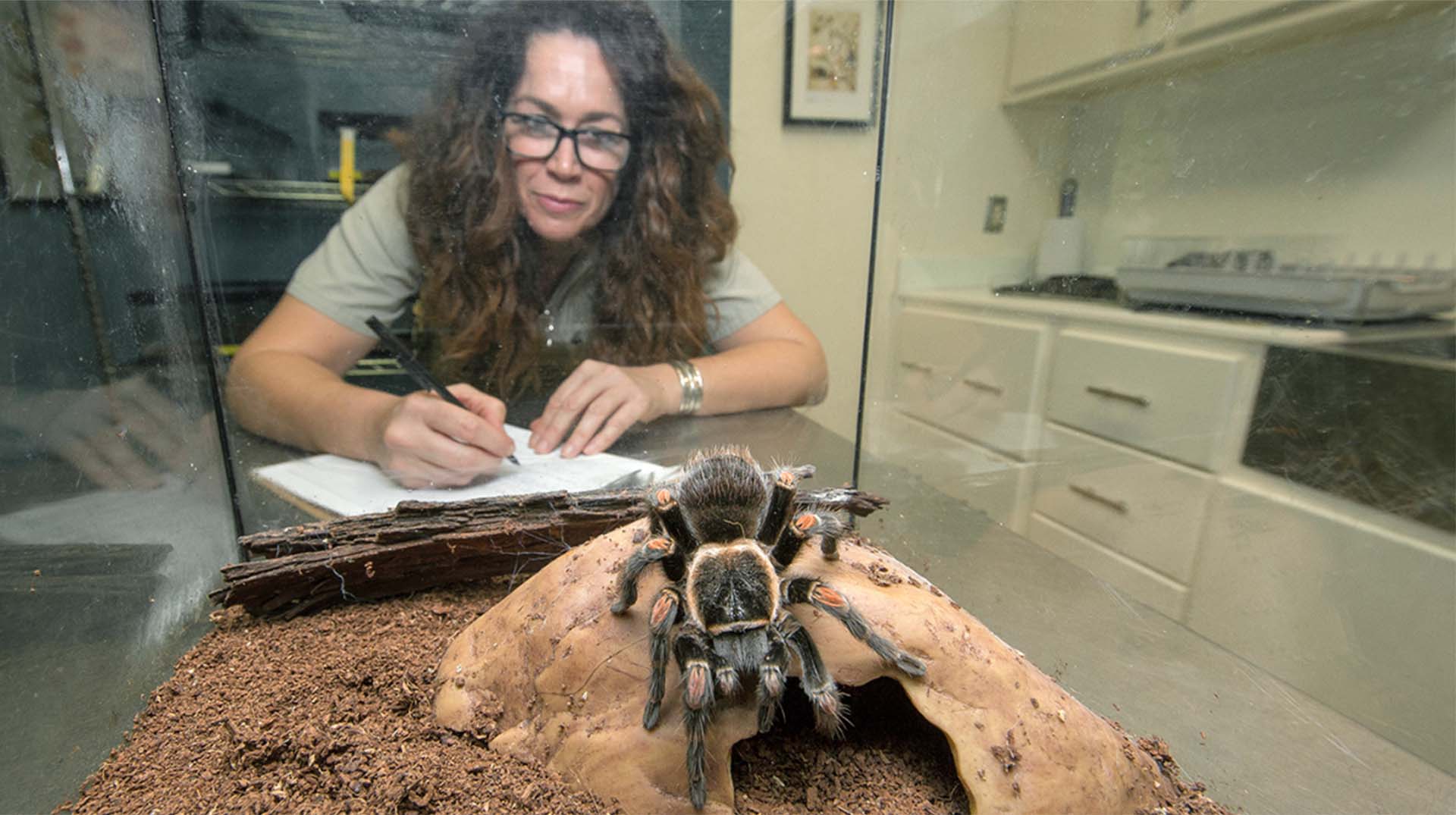 "A keeper walks into a room full of spiders..." But this is no joke, it's a daily occurrence at the Zoo's Arachnid Rescue Center...