Horns aplenty: Wild cattle are larger members of the family Bovidae, which also includes antelope, goats, and sheep. This group includes Asian water buffalo, African or Cape buffalo, bantengs, gaur, yaks, bison, and all domestic cattle. Both male and female wild cattle species have horns, but the bull’s (male) horns are much larger and thicker than the cow’s (female). Cape buffalo have two horns joined so that they cover the whole top of the head. In most species, the bull is also much larger than the cow.

Huge herds of American bison (Bison bison) once roamed the open plains of North America. But early settlers of the West referred to them as buffalo, and somehow that name stuck. These days either term is correct when referring to Bison bison. But remember: there is no species called American buffalo.

It may seem that cattle species don’t do much but rest and eat. But studies have shown that they only sleep from 2 to 10 minutes at a time, and they only get about an hour’s worth of sleep in a 24-hour period! Why don’t they sleep more? Because it’s not safe! Wild cattle must always be on the lookout for danger. Their well-developed sense of smell, along with their eyes and ears, helps them tell when danger is near.

Sheep, goats, and antelope avoid or flee from predators. Larger wild cattle species hold their own through a combination of size, teamwork, and attitude. Still, wolves, bears, lions, leopards, hyenas, and crocodiles prey on their young.

The Cape buffalo (also called African buffalo) has a bad temper and won’t hesitate to fight. It defends its territory and herd at all costs, killing lions, leopards, hyenas, and even humans, if needed. Many consider it to be the most dangerous mammal in Africa.

Most wild cattle are active throughout the day and into the evening. In areas with an increased human presence, herds may become more nocturnal to avoid stressful (and perhaps fatal) interactions.

Humans have been using cattle species such as dairy cows, yaks, and oxen for thousands of years. These domesticated animals are descendants of wild cattle and live throughout the world. Farmers and ranchers continue to develop new breeds of cattle that will be hardier, more disease-resistant, or produce more milk.

Protection from the elements: Wild cattle species live in almost every type of habitat and have developed ways to survive the weather. Yaks and bison often live high in the mountainous areas of Asia. They have long, thick hair to keep them warm in the snow. Cattle in warm climates, such as buffalo, use pools of mud to help them cool off. The mud also keeps pesky insects from biting!

Most cattle are grazers, using their tongue and lower teeth to grab grass and leaves. After the food is swallowed, cattle can bring the partially digested food, called cud, back up to their mouth from the first compartment of their stomach for more chewing. They usually chew this cud during a rest period, when they are calm.

Safety in numbers: Herd size depends on the species. Gaur, bantengs, and forest buffalo form small herds of up to 10 animals. American bison and European bison (or wisent) usually live in groups of 10 to 20 animals. Cape buffalo live in herds of 50 to 500 members. Anoas are the exception. These small cattle prefer to live alone or in pairs, as their thick forest habitat that is not suitable to large herds.

Often several herds may get together during the breeding season and then go their separate ways again. Within most cattle herds there can only be one bull for all the cows. Young males that don’t manage to take over the herd must head out on their own. Without the protection of the larger group, they often fall prey to large carnivores. Sometimes the "bachelor" bulls form small groups of their own for protection.

Water buffalo handle things a bit differently. An experienced cow leads other cows and their young in a large clan. Bulls move into the clan just to breed and then go back to their bachelor groups.

Cattle in large herds tend to do everything together. For example, the whole herd eats at the same time and rests at the same time. American bison are famous for running together for miles at the slightest hint of danger. One loud snort from an alarmed herd member is all it takes to start a stampede.

Wild cattle make many calls that are like the lowing of domestic cattle but are usually lower-pitched. Forest buffalo are less vocal than the other cattle species, and they rarely call except when in a group. Cattle have special calls for moving, spotting a water source, giving a warning, or alerting the others of danger. There are also various grazing calls. Aggressive vocalizations consist of grunting and growling. Bellowing indicates submission to a dominant animal. A calf (baby) bleats and the cow answers with a croak when the two lose contact.

Competition between the bulls during the rutting, or breeding, season can be fierce! Bulls ram head and horns just like sheep and goats do and make a loud bellow. The European bison makes a call that carries 3 miles (4.8 kilometers) away. Gaur bulls make a pleasant song that gets lower and lower the longer they sing it to get a cow’s attention. Bison cows have a sneaky trick to make sure they get the best bull possible. Even if a bull wins a fight to claim her, she may run past other bulls to stir up yet another tussle.

Many mammal newborns, like kittens and puppies, are almost helpless at birth. Their eyes and ears are shut, and they can’t move around well at first. But newborn cattle are able to walk and then run shortly after birth. This is important, because most cattle live in open habitats that make them easy targets for predators. Being able to move right away can help both cow and calf escape danger.

Wild cattle cows give birth to just one calf, but domestic cows often have twins. The young are weaned between 6 to 18 months, depending on species.

Wild cattle are becoming rare. Just 100 years ago, there were 40 to 60 million American bison in North America. But over-hunting wiped them out. By 1903, fewer than 2,000 survived in zoos and private management, and in isolated wild populations.

In 1898, an explorer noted there were more wild yaks (Bos mutus) on a Himalayan hillside than there was hill! But hunting for meat and horns, and loss of habitat due to agriculture, have reduced the numbers of these and other wild cattle species.

Another problem: domestic cattle are sharing the same grazing space. The domestic species are also breeding with the wild species, thus reducing the numbers of pure-bred wild cattle. Diseases from domestic livestock have taken their toll on gaur (Bos gaurus) populations. Bantengs (Bos javanicus) have been domesticated in Asia and even introduced into Australia. Known as Bali cattle, the domestic variety is smaller and reproduces faster than the wild species. Over 90 percent of American bison in North America are undergoing domestication.

The tamaraw or Mindoro dwarf buffalo (Bubalus mindorensis) of the Philippines is at critical risk. There are less than 250 individuals remaining. They were hunted for sport until the 1980s and are now protected by law.

The kouprey or gray ox (Bos sauveli) of Southeast Asia may be extinct. There have been no sightings in the wilderness since the 1960s, and there are none under managed care.

Number of young at birth: 1, although domestic cattle may have 2

There are about 1.3 billion domestic cattle in the world, making them the most numerous of all large mammals except humans.

American bison can leap over barbed wire fences—surprising agility for animal its size. 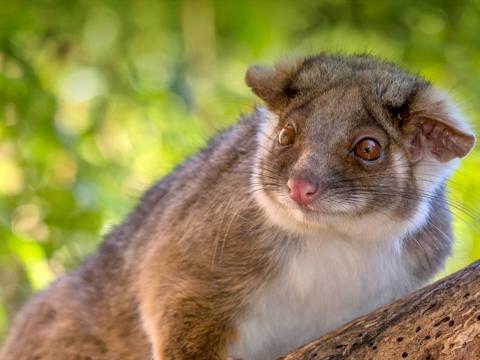