"Leaf it" to the sloth: Thousands of years ago, large ground sloths roamed the United States. They ranged in size from an average-size dog to that of an elephant. These ground sloths had long claws and ate plants. They became extinct about 10,000 years ago. Present-day sloths are much smaller, and live in trees. The anteater is their closest relative.

In a nutshell, sloths are slow-moving, nocturnal creatures that spend almost their entire life upside down in the trees. They eat, sleep, mate, and give birth from this position hanging high among the branches. Sloths are the only mammals whose hair grows in the opposite direction from the hair of other mammals. To accommodate their upside-down lifestyle, the hair parts in the middle of the belly and grows upward toward the back. The hair on the face points upward, too. This allows water to run off during rainstorms! 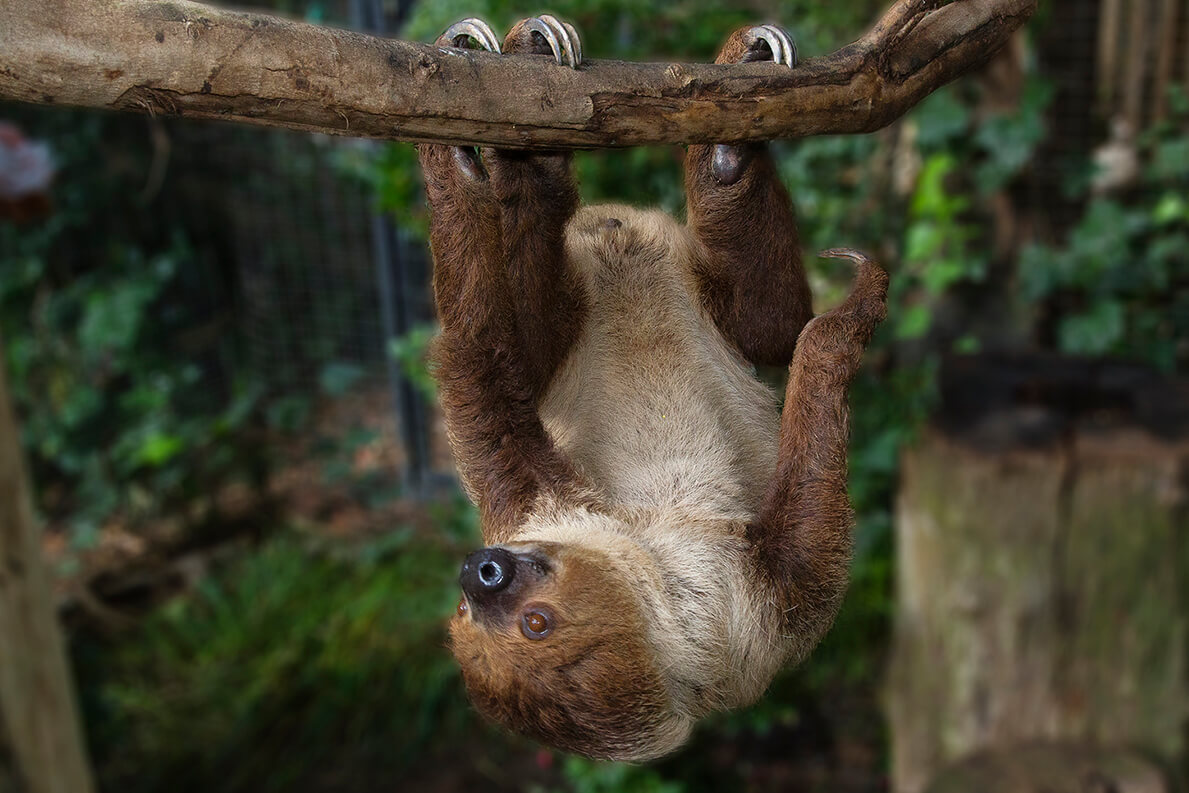 Each strand of sloth fur has grooves that collect algae, giving sloths a greenish tint during the wet season. Two-toed sloths rarely descend to the forest floor. To move to a new area of trees, sloths often wait for the forest to flood and then swim to their next home.

Big forest cats like jaguars and ocelots, birds of prey such as harpy eagles, and large snakes like anacondas prey upon sloths. They defend themselves with their sharp claws and teeth. And, if needed, sloths can move quickly through the trees.

If our own body temperature changes more than five degrees, it means we are sick! The two-toed sloth is different. It has the lowest and most variable body temperature of any mammal, ranging from 74 to 92 degrees Fahrenheit (24 to 33 degrees Celsius). If there is a long period of cool, rainy weather, a nursing female can get too cold. This causes the bacteria in her stomach to stop working, so the mother can no longer digest her food. The young continues to nurse as its mother starves to death. This chilling phenomenon is called cold-weather orphan syndrome, as sometimes the youngster falls to the ground and needs to be rescued by humans.

Sloths live in trees in the tropical and cloud forests of Central and South America. Their curved, sharp claws are 3 to 4 inches (8 to 10 centimeters) long. These claws are handy for hanging onto tree branches but make walking on the ground awkward. Yet sloths are great swimmers and can drop from a tree into a river to swim across it while doing the breaststroke! When sleeping, sloths often curl up in a ball in the fork of a tree.

With a muscle mass of only 25 percent (most mammals have twice as much), sloths can’t shiver when it’s cold. But they weigh much less than other wildlife their size, which is helpful for life in the trees. Sloths can grab the leaves and shoots on high, narrow branches that others can’t reach. Two-toed sloths have two toes with claws on the front feet and three toes on the back feet, used to hang upside down from branches. (Three-toed sloths have three toes on their front AND back feet.)

Sloths look like some kind of slow-motion monkey and have long had a reputation for being lazy. The reason they move so slowly has a lot to do with what they eat: a variety of leaves, stems, buds, and some fruit. This kind of diet requires a special digestive system. Sloths have a large, four-chambered stomach, like a cow. Bacteria in their gut help digest the large amount of plant matter they eat. Due to the low nutritional value of their leafy diet, sloths usually move at a leisurely pace and sleep a great deal. They sleep 15 to 18 hours per day and (slowly) look for food at night. Even their innards move slowly, and some food items can take an entire month to digest! This slow metabolism helps sloths survive injuries that would kill other wildlife.

Sloth romance: These ponderous mammals spend most of their time alone. But when a female is ready to breed, she lets out a nighttime “scream” that alerts any interested males. If more than one male reaches her at the same time, they slowly fight each other while hanging by their rear legs! Winner takes all, and several months later, the female gives birth (while upside down) to a single offspring.

The youngster must grab onto its mother's hair at birth and find its way to her nipples to nurse. The mother's body position looks like a comfortable hammock of sorts as baby rests on her chest. The baby begins sampling solid foods at about 10 days but still nurses for about a month. After that, the youngster continues to cling to its mother’s belly but eats whatever she eats. It first hangs upside down on its own at 20 to 25 days.

The sloth youngster stays with its mother for six months to two years, depending on the subspecies. It then “branches off” to live on its own. The young inherits a part of the home range left vacant by the mother, as well as her taste for certain leaves. Several sloths can live in a similar home range without competing for food or space.

A sloth’s voice sounds like the hiss of a deflating balloon, but they can also squeal and grunt as needed. A low bleat signals distress—sloth ears are most tuned to low-frequency sounds. The sloth has an excellent sense of smell. Males scent mark on tree branches from a gland on the rump.

Deforestation and other forms of habitat destruction remain threats for the sloth. Other human-made threats include power lines and roads. Educating children and adults in the sloths’ home countries about their importance to the ecosystem—and how to treat sloths respectfully—remains a challenge for those who want to help this unique and wonderful creature.

Both types of two-toed sloth live in zoos. Yet identifying the two has always been problematic—they look alike! Based on the genetic information, a senior research associate in our Genetics Division designed a low-cost, easy-to-use genetic tool to identify two-toed sloths and improve management of the population in expert care. This tool allows visualizing DNA differences between species in a polymer matrix, a procedure that uses non-sophisticated tools in simple laboratory settings.

Gestation: 7 to 10 months, depending on species

Age of maturity: 2 to 5 years; females mature sooner than males

With their low-energy diet of leaves and occasional fruit, sloths move slowly and sleep 15 hours a day to conserve energy.

Organs such as the heart, liver, and spleen are placed differently in sloths than in other mammals to accommodate their upside-down lifestyle.

Sloths have a powerful grip: their long claws curve around tree branches like a safety harness. Even after a sloth dies, it sometimes remains hanging in the trees with its death grip.