Smokey the bandit: Raccoons are one of the few native animals in North America that have not been restricted by urbanization and human development. They have adapted to living with and near humans. Often seen as a pest to farmers, raccoons play an important role for our ecosystem by controlling the rodent populations that they prey upon. Raccoons are highly intelligent and curious animals. Their superior dexterity has proved no match for combination locks on dumpsters or fastened windows. They will do anything in their power to acquire food of all kinds.

Raccoons weigh between 12 and 35 pounds (females are usually smaller than males). Their dense fur is grayish-brown, and the tail has 5 to 7 complete dark rings, alternating with broader brown or gray rings. The tip of the tail is always dark. All raccoons have bandit-like face masks. They have round ears bordered by white fur. The raccoon's coloration is ideal for a nocturnal species, enabling them to vanish like smoke when harassed. Raccoons have highly dexterous front paws and have been known to unlock locks and get into trash cans for food. Raccoons are excellent climbers, as well as being good swimmers; however they may be reluctant to get wet, since they do not have “waterproof” fur.

There are six species of raccoon, in addition to the familiar North American raccoon. Most other species live on tropical islands. During the 20th century, the species was introduced to other parts of the globe, and now has an extensive presence in countries like Germany, Russia, and Japan.

Home is where the water is: Raccoons are known for washing their food before consuming it. Their latin name “lotor” means “the washer." Being a very adaptable species, raccoons can be found anywhere water is available. They have been found in marshes, prairies, forests, and even in urban areas. They originated in North America and can be found across the United States, Canada, and Central America. They are terrestrial animals, but also excellent swimmers.

Raccoons den in hollow trees, rock crevices, and ground dens. In urban areas, chimneys, attics, and crawl spaces underneath homes are common den sites. In late fall and early winter, their fur will thicken into a heavy winter coat and they will eat as much as they can find to tide them over during harsh weather. In winter, raccoons spend weeks in their dens without eating. However, raccoons do not hibernate; they live off their fat reserves and can lose up to 50 percent of their body weight.

Raccoons are nocturnal and are rarely active during the day. However, when in dire need of food, they will venture out during the daytime. They do not travel far from a comfortable den. They only go as far as their appetite will take them. They are primarily a solitary animal, though mothers and their young stay together for the first few months.

Raccoons are opportunistic omnivores. Preferred plant-based foods include tubers, seeds, berries, and nuts. During fall, raccoons stock up on fatty nuts and seeds for the coming winter. Animal foods raccoons indulge in include insects, fish, eggs, carrion, small mammals, small birds, mollusks, and crustaceans. Raccoons have been known to dumpster dive and feast on human leftovers.

In the natural world, raccoons snare a lot of their meals in the water. These nocturnal foragers use lightning-quick paws to grab crayfish, frogs, and other aquatic creatures. On land, they pluck mice and insects from their hiding places and raid nests for tasty eggs.

Raccoons also eat fruit and plants—including those grown in human gardens and farms. They will even open garbage cans to dine on the contents. But whatever is on the menu gets a quick rinse in a nearby water source!

Both adult male and female raccoons reach sexual maturity around one year of age; however, most males wait another year to breed because they are in strong competition with larger, older males. Breeding occurs between January and June, depending upon environmental conditions. The gestation period is about 63 days. Most raccoon litters are born between April and May. Males play no role in the rearing of cubs.

Litter size ranges from one to seven cubs, with four cubs being the average. Cubs are typically 3-5 ounces at birth, lightly furred, with a light-colored mask and rings on the tail. Cubs open their eyes around 3 weeks of age, start eating solid food around 7 weeks old, and by 2 months old are traveling alongside their mother. The young typically stay with their mother through the first winter and part the following spring (when the female is ready to breed again). The cubs are about 10 months old when ready to leave their mother.

The majority of vocalization produced by raccoons comes at a very young age. A chattering or whiney sound is produced by newborn raccoons, reminiscent of baby birds soliciting mom to feed them. When their eyes open at around three weeks old, they become very vocal using hisses, growls, and alarm snorts. As adults, raccoons make their point by growling, snarling, and hissing when disturbed in their den or to scare off any threats.

The raccoon’s main predators are coyotes, wolves, large hawks, and even owls. Raccoons tend to stay safe from the majority of predators by remaining in their den for the most of the day. Although inactive inside of their den, they are constantly aware and alert; they are known to be aggressive when threatened.

The raccoon exhibit  is located at the Zoo's Conrad Prebys Polar Bear Plunge experience, next to the reindeer.

The raccoon is listed as a species of least concern on the International Union for Conservation of Nature (IUCN) Red List of Threatened Species. However, in addition to natural animal predators, humans impact raccoon populations. Urbanization and development has been a cause for frequent encounters with this animal, and some encounters can be problematic. The majority of complaints are about female raccoons denning with her cubs in a chimney or attic. Raccoons are also primary carriers of rabies, so trying to pet them is not a good idea. However, raccoon-to-human transmission of rabies is exceedingly rare.

Number of young at birth: 1 to 7 cubs

Age of maturity: About 1 year

The English word “raccoon” is an adaptation of a native Powhatan word meaning “animal that scratches with its hands.”

A group of raccoons is called a “nursery.”

Christopher Columbus is the first individual we know of to have written about the raccoon. 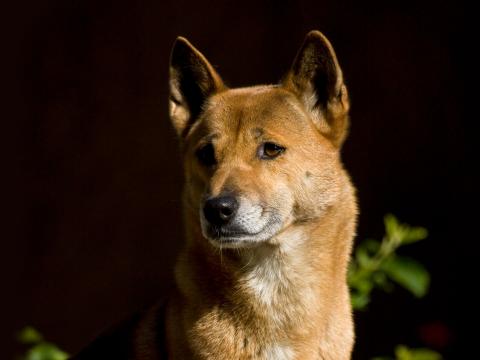