Mangabeys are some of the most rare and endangered monkeys on Earth. These large forest dwellers are found only in Africa. They look somewhat like guenons but are bigger. Local people call some of them "the ones with the thin waist" or "four-eyed monkeys," because some kinds of mangabeys have bright white eyelids.

Taxonomists have put mangabeys into two separate genera based on physical differences: white-eyelid mangabeys Cercocebus and crested mangabeys Lophocebus, which have dark skin and eyelids and crests of hair on their heads. In 2006, a third genera was added: Rungwecebus, for the highland mangabey, which is the first new primate genus in 83 years.

All mangabeys have a tail that is longer than their body, providing balance for them as they scamper through the rain forest canopy.

Mangabeys can be golden brown, gray, dark brown, or soft black, depending on the species or subspecies, usually with a lighter color on the underbelly. Youngsters are generally darker than the adults. White-collared mangabeys have reddish hair on their head, a "beard" on each cheek, and white hair that wraps around their neck like a collar (hence the name!) Black mangabeys have long, grayish brown whiskers that almost cover their ears and a high crest on their head—a pointy hairdo!

Mangabeys have some interesting ways of communicating with each other. It's often hard to see one another in the dense forest canopy, so sound is very important. In fact, mangabeys can be very noisy! A special throat sac gives them a booming voice. The sac is larger in the adult male—he can make shrieking alarm calls to alert others to danger, and he barks, twitters, and grunts to let other mangabey groups in the area know where his is, so they don't accidentally intrude. The adult females often join in with a loud chorus.

Adult male mangabeys also make a sound that biologists call a whoop-gobble. The whoop gets the attention of other mangabeys in the area; the gobble tells everyone who and where he is. This unique call may be heard for a distance of up to 1,000 yards (1 kilometer).

White is an important color when you need to get your point across. White-collared mangabeys use movements of their white-tipped tails to express themselves. White hair on the underside of the chin helps make other facial gestures more noticeable. For white-eyelid mangabeys, batting their eyelids and raising their eyebrows can have a whole range of meanings. Making these facial expressions and flashing their white eyelids against their darker fur help get the message across. Flashing eyelids can mean "warning—watch your step!"

Like most monkeys, mangabeys are very much at home in trees, spending most of their time there. However, white-eyelid mangabeys are also comfortable on the ground, traveling on their hands and feet between patches of forest or to forage in the leaf litter for tasty food items. In some areas of the forest, the ground is swampy, but that’s not a problem for mangabeys. Webbing between their fingers and toes helps these amazing monkeys swim!

All mangabeys are excellent jumpers, and gray-cheeked mangabeys and white-collared mangabeys have a tail that is strong enough to hook onto branches as they leap about the forest canopy.

Mangabeys are mainly fruit eaters, although they can also eat leaves, nuts, seeds, insects, and spiders. Powerful teeth and jaws help them crack hard nut shells or bite into thick-skinned fruits. Mangabeys also tear bark from trees using their teeth and hands to find bugs and spiders hiding underneath. Large cheek pouches act like a shopping cart: mangabeys fill their pouches with food until full! The biggest meal of the day for mangabeys is breakfast, and they start foraging for food in the early morning, often before the sun comes up.

Like many monkeys, mangabeys lick nectar from flowers, moving from tree to tree for this sweet feast, earning them status as pollinators as well as seed dispersers.

Mangabeys live in groups, called troops, of about 10 to 40 individuals, depending on the species and the availability of food and habitat. There is usually one adult male that acts as leader and the troop's defender, but sometimes larger troops have two or three adult males that split off with their own family units to forage for food. When there is plenty of food available, mangabey troops often gather together for a while and even exchange troop members.

Much like baboons, a female mangabey's buttocks swell when she is ready to breed. This is her visual signal to the adult males. A single infant is born with soft fur, and its eyes are open. Its instinct to grasp onto its mother is so strong that it often grabs at the mother's hair with its hands as it's being born! Newborns cling to the mother's belly; older infants often ride on her back. Young are weaned when 7 to 10 months old, but stay near their mother until she gives birth to a new sibling.

Mature females stay with their troop, but males leave the group when they are about five years old. When a male becomes sexually mature, he leaves his troop to find another one to join. If he can't find one, he lives alone until he does; single males do not form all-male groups.

Like so many other rain forest inhabitants, mangabeys face many pressures including (over)hunting and habitat loss. Many mangabey populations are severely limited in population size and areas of inhabited forest. Along with other large primates such as chimpanzees and gorillas, these monkeys are among the first of the larger mammals to disappear from forests close to human settlements.

People continue to destroy mangabey habitat by logging the trees in their forest homes and hunting the monkeys illegally for bushmeat. And because mangabeys are such fruit lovers, they tend to raid fruit plantations and are often killed as pests.

The Association of Zoos and Aquariums has Species Survival Plans (SSP) for mangabeys which help to maintain genetic diversity in zoo populations.

A red-capped mangabey in the care of humans has a median life expectancy of about 17 years.

Number of young at birth: Usually 1; twins are rare 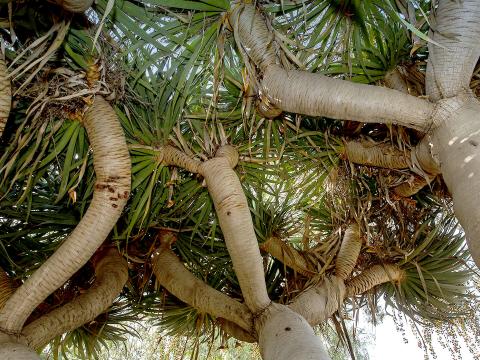