It's related to giraffes?! The okapi (pronounced oh-KAHP-ee) is beautiful and unusual. With its white-and-black striped hindquarters and front legs, it looks like it must be related to zebras! But take a look at an okapi’s head, and you’ll notice a resemblance to giraffes. The okapi is indeed the only living relative of the giraffe. Like a giraffe, an okapi has very large, upright ears, which catch even slight sounds. An okapi also has a long, dark, prehensile tongue, like a giraffe’s, to help it strip the buds and young leaves from the understory brush of its rainforest home.

Okapis are hard to find in their native habitat: deep forests of the Democratic Republic of the Congo, including Ituri Forest, a dense rainforest. Okapis are very wary, and their highly developed hearing alerts them to run when they hear humans in the distance. In fact, while indigenous people of the Ituri Forest knew of okapis and would occasionally catch one in their pit traps, scientists did not know of okapis until 1900. The secretive nature of okapis and the difficulty most humans have traveling in okapi habitat have made okapis hard to observe. We estimate there might be more than 35,000 okapis in their native habitat, but no one knows for sure.

Made for a rainforest: The okapi's home is in the tropical rainforest in the northeast region of the Democratic Republic of the Congo (formerly Zaire), in Central Africa. Why does the okapi have zebra-like stripes? These markings, which seem very bold to us, offer great camouflage when an okapi stands in the partial sunlight that filters through its dense rainforest habitat. The stripes may also help a young okapi follow its mother through the dark forest, and they may help adults find each other, too. The okapi’s dark purplish or reddish brown fur is dense and feels like velvet. It’s also oily, so water slides right off, keeping the okapi dry on rainy days. Only male okapi have horns, which are covered by skin, short, and slant backward so they won’t get tangled in forest branches.

If okapis are related to giraffes, why aren’t they as tall as giraffes? In a rainforest, there are trees with branches hanging down, as well as roots and tree trunks to dodge. Okapis need to have shorter legs and necks to help them swerve around these obstacles. Being really tall is not a good idea in a forest!

Okapis often travel up to 0.5 miles (0.8 kilometers) a day in search of food, usually along trails worn down by generations of okapis. They are generally solitary, unless an adult female has a calf with her. Adult males have home ranges that cover more area, and they can travel up to 2.5 miles (4 kilometers) a day. The males try to keep other males out of their territories but allow females to travel through in search of food.

Both male and female okapis are most active during the afternoon through the evening. They are important forest browsers, eating 40 to 65 pounds (18 to 29 kilograms) of leaves, twigs, and fruits each day and leaving a “pruning line” in the foliage. Okapis use their prehensile tongue to get food by pulling leaves from trees and into their mouth. The tongue is also an important grooming tool, helping to keep the velvety soft, short coat in tip-top shape. Okapis have also been seen eating clay and burnt charcoal, probably for minerals. And just like giraffes, sheep, and goats, okapis are ruminants.

I smell you: While okapis travel for the most part by themselves within their home ranges, they still have ways of communicating with others whose ranges overlap. A scent gland on each foot leaves behind a sticky, tar-like substance wherever they have walked, marking their territory. Okapis have a great sense of smell. By checking the ground, an okapi can tell if another okapi has been there. Males also mark their territory by urine spraying. Normally silent, female okapis vocalize only when they are ready to breed.

Okapi newborns can stand up within 30 minutes of birth and nurse for the first time within an hour of birth. They have the same coloring as an adult but have a short fringe of hair along the spine, which generally disappears by the time they are 12 to 14 months old. Mothers hide their newborn calves in a safe, secluded spot, returning regularly to allow the calf to nurse. This helps keep predators from finding a hidden newborn until it has had a chance to grow and gain strength. An okapi calf starts trying solid food at just three weeks old. Calves triple their size by the end of their second month but do not reach full adult size until three years of age.

Okapis are very shy. Their reddish brown-black coat camouflages them in the deep forest. In the thick trees and underbrush, okapis rely on their hearing to warn them of danger. Their huge ears pick up even the softest sounds coming from any direction. They listen for leopards, which hunt adult okapis, as well as smaller wild cats, which can attack a young calf.

San Diego Zoo Wildlife Alliance conservation scientists discovered that okapis have a secret language. They watched okapis closely and recorded their sounds. They heard coughs, bleats, and whistles quite often, but it wasn’t until they returned to the Sensory Ecology Lab to examine their recordings closely that they realized okapis also use other calls with very low frequencies. These calls are so low, in fact, that we humans cannot hear them at all! It’s only when we look at recordings via specialized computer software that these infrasonic mutterings become visible.

Our conservation scientists then recorded our okapis around the clock to find out why they use these low-pitched calls. One explanation is that these calls have evolved for communication between Mom and her baby while she’s out foraging. In this situation, Mom can “check in” with her offspring without alerting potential predators of the fact that her baby is vulnerable. Predators remain unaware of these chats, as, like us, they cannot hear sounds so low in pitch. It’s the okapi version of students who text message each other in class so that the teacher is unaware that they are “talking.”

The changing politics of Central Africa, hunting, and the continued loss of habitat threaten the beautiful okapi. Fortunately, in 1992, one-fifth of okapi habitat in Africa’s Ituri Forest was set aside as a wildlife reserve. The Okapi Wildlife Reserve, with support from San Diego Zoo Wildlife Alliance, other zoos and conservation organizations, and the local community, continues to protect and to support study of this rare and unusual forest dweller. As an “umbrella species" in conservation efforts, helping to save okapis also helps protect other wildlife that shares their habitat in Africa.

To see an okapi in Africa you would need to spend days or even weeks in the Ituri Forest. And even then, you probably wouldn’t see one, as they are elusive and live in a difficult habitat for most humans to move around in. This is why most people in Africa have never seen an okapi, other than in a photo.

In 2007, San Diego Zoo Wildlife Alliance sent two of our okapis to the Pretoria Zoo in South Africa. For the first time, people on that continent who visit that zoo can actually see elusive okapis. As they admire and learn about okapis, we believe they will want to help protect okapis and their forest home.

An okapi in human care has a median life expectancy of about 16 years.

The ears of an okapi can rotate independently, so it can listen for sounds both in front and behind.

The okapi's dark tongue is long enough to reach its eyes and ears.

Okapi stripes are sometimes called "follow me" stripes, as the bold pattern makes it easy for a calf to follow its mother through the dark rainforest.

Like the giraffe, the okapi must splay its legs to reach the ground when drinking. 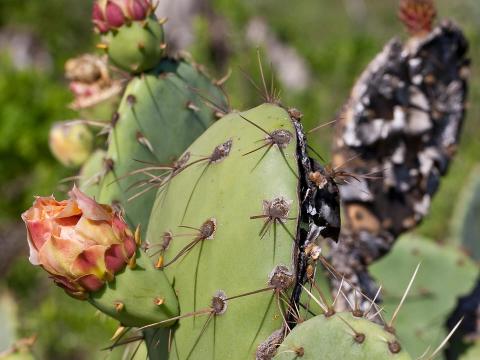