From a distance, the metallic starling looks just like another small black bird. However, at the right angle of sunlight, this beautiful bird shows an array of purple and green iridescence. Many starlings are native to European countries, but the aptly named metallic starling is the only starling native to Papua New Guinea, Northern Australia, and surrounding islands. This songbird is known for the spectacular swirls and shapes they create in the sky, as they travel in colonies of seemingly endless individuals. They are best known for their unique style of intricate nests that hang from the trees of their breeding ground in Northern Australia.

Pretty bird. Metallic starlings are medium-sized birds with a long, graduated tail. Males and females look alike: all-black, with red eyes and a short bill. They appear to be “metallic” because of the purple and green sheen that reflects when the sunlight hits them at just the right angle. In contrast to adults, juveniles are brown with a white patch on their chest and gray coloration on the throat. As they mature, they develop red eyes and black plumage. The final juvenile trait they lose is the white patch on their chest.

Singing soprano. These birds have a very high-pitched song when communicating to one another. Their talents have also been known to include mimicry of other neighboring birds. Gregarious in nature, these birds have a constant chatter. Nesting colonies are fairly easy to find, because of the volume of individuals vocalizing.

These songbirds are adaptable to many habitats, including woodland, coastal wetlands, and rainforest. They are the only native starlings to Papua New Guinea and Australia’s nearby islands. They cover a large area because they migrate during the breeding season. At the end of the dry season, they migrate to Northern Australia for breeding season. 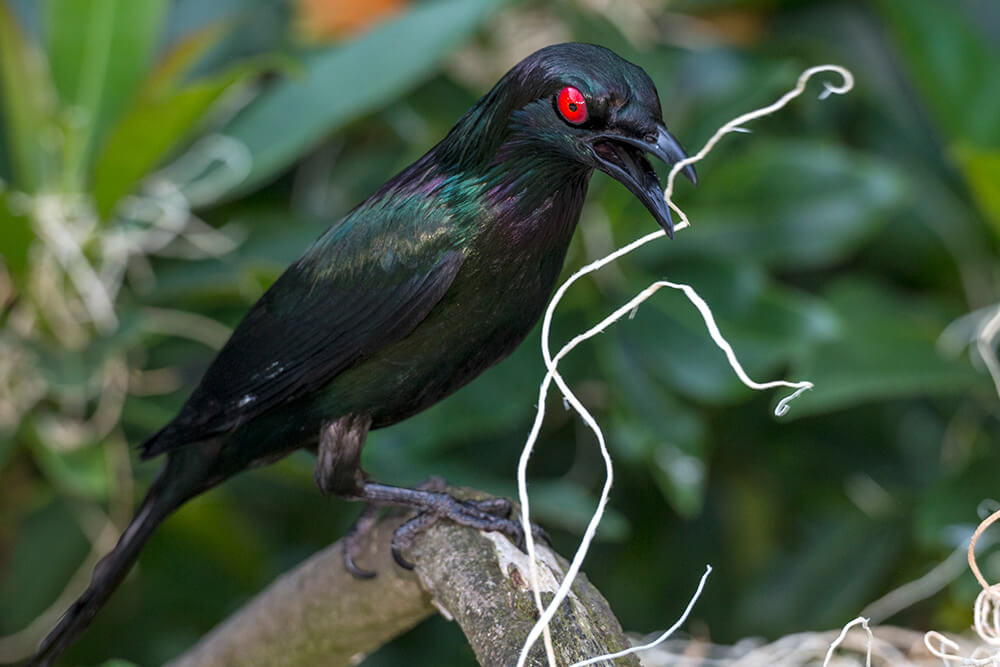 Birds of a feather. These birds spend their days in large flocks consisting of thousands of individuals. They spend time in the trees feasting on fruit, nectar, and insects. As the sun sets, they roost overnight in trees that are close to one another. Before settling in, they gather and create a swirling display in the sky, chattering away with one another.

Eat, "Prey," Love. Metallic starlings, being small birds, have a wide variety of predators including introduced foxes, larger birds of prey, and dingos. These gregarious birds practice safety in numbers by staying together in a large flock. These birds are at risk when first leaving the nest at 21 to 25 days old.

Group migration. These birds migrate to northern Australia for breeding in massive colonies consisting of thousands of birds. Here, they prepare globular woven nests that hang from the trees. This differs from other starlings that are cavity nest builders. Metallic starlings utilize grasses, bark, and feathers for building these intricate nests. Breeding season is from August through early spring in the birds' native habitat.

Females can have multiple clutches during this extended period, laying one to three eggs per clutch. On average, females produce five to seven offspring during the entire breeding season. Juveniles leave the nest in 21 to 25 days. While they leave the nest, they do come back to their parents to be fed for some time after.

In early spring, the birds migrate back to Papua New Guinea and surrounding islands.

Metallic starlings have been described as abundant. This bird serves an important role in its habitat as a seed disperser. Several tropical plants benefit from these birds traveling in mass colonies.

The San Diego Zoo has a large breeding colony of these birds. Years of successful breeding have allowed us to share metallic starlings with other zoos around the country.

Number of eggs per clutch: 1 to 3; may have multiple clutches per season

Metallic starlings are also known as shining starlings because of their beautiful purple-green color that reflects with the sunlight.

Breeding colonies can consist of 400-plus nests.