Not a mole, not a rat: The forbidding environment of East Africa’s deserts is home to one of the most bizarre rodents, the naked mole-rat. These beauties might not win any pageants, but they are fascinating. Yes, these odd little creatures with pink, wrinkly skin dig and live in underground burrows the way moles do. Yes, they have skinny, rat-like tails. Yet naked mole-rats are more closely related to porcupines, chinchillas, and guinea pigs than they are to moles or rats and are the only mole-rats that have practically no hair.

Why are they "naked"? Native to the desert regions of East Africa, which can be pretty warm during the day, naked mole-rats live underground. If it does get cold at night, the little mammals just huddle together in a mole-rat pile and use each other's body heat to keep warm. And since they spend their lives underground, they don't need hair for sun protection. It's hard to see, but naked mole-rats do have about 100 fine hairs on their body that act like whiskers to help them feel what's around them. Hairs between their toes help sweep soil behind them while tunneling.

Most mole-rats live by themselves. But the naked mole-rat and the Damaraland mole-rat are the only two mammal species that are eusocial (yew-SO-shul). This means groups have a very advanced degree of social organization—much the way bees and ants live. Several generations of mole-rats live together. Similar to a colony of ants, one queen is the mother of almost all of the other mole-rats. Each rodent in a mole-rat colony has a job, like gathering food, digging tunnels, defending the burrow, or caring for young. Scientists believe the naked mole-rats' eusocial behavior is due to the challenges of living underground in the desert, where there is little food or water.

A naked mole-rat colony may have from 20 to 300 individuals living in an underground area that can be as large as 6 football fields! It is filled with a tunnel system that stays at a warm 86 degrees Fahrenheit (30 degrees Celsius), even though the outside temperature can get much colder or hotter.

To keep the colony healthy and safe, there are chambers, or rooms, at different points along the tunnel system. Each chamber has a purpose, just like the rooms in your home. There is the nesting chamber, or nursery, where the queen (dominant female) stays with the pups (babies), and feeding chambers, used for collecting and storing food—a mole-rat pantry! There is even a toilet chamber, where the members go to the toilet (sorry, no shower).

Most people think naked mole-rats are blind. Their tiny eyes are not much use underground, but they can still see a little bit. However, mole-rats rely on their senses of hearing, smell, and touch more than they do their sight. Researchers have studied them in both light and dark environments and find their behavior doesn't change.

Naked mole-rats are found where there are plants with large underground roots and tubers. Eating these tough foods requires some pretty strong and sharp teeth. Naked mole-rats’ front teeth also help them tunnel through dirt while looking for these food items. They are able to get enough moisture from their diet, so they don’t need to dig for water as well. Like all rodents, these teeth continue to grow, but by gnawing on hard things, they keep their teeth from getting too long! Naked mole-rats can move their front teeth independently, spreading them apart and moving them together, like a pair of chopsticks.

Yucky, but true: naked mole-rats eat their own poop. But they have a very good reason for doing this. The roots and tubers they eat are very hard to digest, so their intestines are full of microscopic organisms to help with digestion. To absorb more of the nutrients from their food, naked mole-rats eat the poop. It's like getting two meals for the price of one. They also also roll in their feces. Because naked mole-rats live in the dark, they have nearly lost the use of their eyes. In order to identify members of the colony versus an intruding colony, they all roll around in the toilet chamber. This way everyone in their colony smells the same!

The naked mole-rat colony has a specific job for each member and is led by the queen. Only a small group of males is allowed to mate with the queen. The other naked mole-rats in the colony serve as soldiers or workers. The mole-rats assigned as workers scout for food, dig the tunnels, and care for the queen's pups.

The queen of the colony is larger and longer than all the other mole-rats. Her job is to breed and have pups and to keep her position as the dominant mole-rat in the colony. But the queen is not born into her position: she must earn it. Females fight, even to the death, for the right to be queen. Once a queen is established, she actually stretches the space between the vertebrae in her backbone to become longer and get ready to have pups.

Her position as queen is never secure, and she must continue to fight off other females if she wants to stay in charge. The queen often inspects the tunnels and chambers and tries to keep control of her colony by biting and pushing the other mole-rats to remind them she is the boss.

If a snake or other predator comes into a tunnel, the workers let out an alarm call to alert the soldiers. Like a little army unit, the soldiers run off to defend the colony with their large, sharp teeth. Several of the soldiers may pile on top of each other to block the way, and all the predator sees is many sets of gnashing teeth!

A naked mole-rat colony works together for the good of the group, and that includes sharing food. Scientists who study naked mole-rat behavior have even seen pups take turns nursing. If a food scout finds a tasty root or tuber, he or she carves off a piece with those sharp teeth and dashes back to the group while chirping and waving the morsel overhead! The other workers follow the scout's scent back to the new food source and bring it back, piece by piece, to the food chamber.

The queen's workers dig all day to bring her food, so she can devote her time to reproduction. It's a good thing she has help, because a naked mole-rat queen can have up to 27 pups at a time. That's a lot of little ones to care for, and she can give birth four or five times a year—whew! After each helpless pup is born, it is cleaned and carried to the nursery by a worker. The queen comes into the nursery to nurse her pups. Within a few weeks, the pups start to explore the tunnels, and in a few months they take their place as part of the workforce. By one year of age they are full grown.

Fortunately, naked mole-rat populations are in no immediate danger. They live in areas where there is little human development, so they are relatively undisturbed. Naked mole-rats living in Kenya’s national park system are protected. Let’s hope it stays this way for all the populations of this fascinating little creature!

Tail length: Up to 3 inches (8 centimeters)

About 25 percent of a naked mole-rat's muscle mass is in its jaws.

The dominant female, or queen, has 12 nipples to feed up to 27 pups.

Like some humans, naked mole-rats grind their teeth during sleep.

Naked mole-rats have a whopping 18 different vocalizations (the most of any rodent) that are used to get their point across.

Naked mole-rats can run both forward and backward though the maze of tunnels they dig.

Naked mole-rats have been known to chew through concrete. 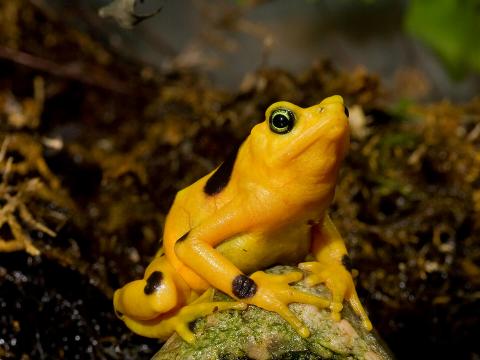