Singin' in the rain forest: The mossy, wet cloud forest on the island of New Guinea holds an ancient secret: a seldom seen, fiercely predatory wild canine called the New Guinea singing dog. Cute and perky, singing dogs are not exactly scary but rather like little pooches with big voices! They use their tuneful howling to communicate with other “singers.”

Singing dogs have a dense, rough coat that is golden red or black and tan with white markings. Wide cheekbones, a narrow muzzle, and petal-shaped ears give the dog’s face a distinctive, impish expression. Well adapted to hunting in steep areas with thick vegetation, the singing dog’s joints and spine are extremely flexible for a dog—they climb and jump like a cat! Singers are great climbers, even climbing trees, and their sparring matches often take them up hills and over ledges.

Are New Guinea singing dogs domestic dogs, feral dogs, or wild dogs? Yes—they have, at one time or another, been classified as all three! Their taxonomy has caused a scientific hullabaloo for over 50 years. The New Guinea singing dogs’ fossil records date back at least 6,000 years: they are considered to be living fossils! Maybe they were Stone Age man's best friends?

Singing dogs made their debut in the modern scientific community in the 1950s as a wild dog species. The first pair of singing dogs to leave New Guinea went to the Taronga Zoo in Australia in 1957. In 1958, they were given the scientific name Canis hallstromi after Sir Edward Hallstrom, then president of the Taronga Zoo. In 1969, they were reclassified as feral dogs and listed as a subspecies of the Australian dingo Canis lupus familiaris dingo. Recently, they have been reclassified yet again and are back to Canis hallstromi. Whew!

So, which came first: the dingo or the singer? Up until about 6,000 years ago, there was a land bridge connecting Australia and New Guinea. The Australian dingo could very well have originated from the New Guinea singing dog and then adapted to hunting larger prey in Australia’s wide-open spaces.

OR, the New Guinea singing dog may have originated from the dingo and adapted to hunt in thick vegetation on steep mountainsides. OR, there is always the possibility that a now-extinct ancient dog population separately founded both species. Are you dizzy yet?

Singing dogs are considered either the wildest domesticated dog or most domesticated wild dog. When well socialized to humans, they are very people-friendly. However, most of the time people do not even see them in the wild, as they are extremely shy.

New Guinea singing dogs are different from domestic dog breeds in several ways. Physically, their upper first molar, called a carnassial tooth, is quite large, a trait normally present only in wild canid species such as wolves. Then, their eyes seem to be more reflective of light than domestic dogs', shining bright green in low light. The singers also appear to have social or play behaviors that are different from that of wolves and dogs. They like to be tidy and neat, and they regularly groom themselves, much like a cat.

Generally, most of the singing dog’s vocalizations are similar to that of the wolf, dingo, and dog, but its howl is incredibly unique. When in a group, one singing dog starts singing and then others join in at different pitches, each with its own unique voice. Singers also whine, yelp, bark, and scream (a drawn-out yelp).

Dog food: Little is known about singing dogs in the wild, not even their dining habits. When hunting, they probably do so alone. Meal leftovers show that singers prey on small mammals, small reptiles, and birds; they even try to hunt 3.5-foot-tall (1-meter-tall) dwarf cassowaries! New Guinea singing dogs have a strong hunting drive and fearless nature, and they are highly curious. The dogs can get their entire body through any opening wide enough for their head. If it moves, they hunt it!

At the San Diego Zoo and San Diego Zoo Safari Park, singers are fed a ground meat product made for zoo carnivores, dry kibble and canned dog food, chicken breast, and beef heart, with extra treats for training. Twice a week, our singer family receives rib bones. They are definitely not required to sing for their supper, but they usually do!

Not much is known about the family habits of elusive wild singers, but it is most likely that they do not live in packs. Researchers believe that New Guinea singing dogs probably hunt alone and possibly defend a territory in mated pairs. Although their group numbers may be small, there are social rules and a dominant dog. At the San Diego Zoo, we’ve observed that when in new or unfamiliar situations, female singing dogs tend to be most confident and assertive, while males are more cautious and submissive.

Both parents participate in raising puppies, usually with the father taking on the role of disciplinarian. Puppies spend most of their day sleeping or playing. Unlike most doggies’ happy, tail-wagging play bow, the singers’ entire body is lowered and an intent stare is directed at the potential playmate. They will then take off running toward their playmate, ready to tackle, wrestle, nip, pull, pounce, and, of course, bark. Playing reinforces social bonds and is great practice for future hunting expeditions.

Sir Edward Hallstrom, then president of Australia’s Taronga Zoo, presented the San Diego Zoo with our first singing dog, a female, in 1957. (The dog’s species name, hallstromi, comes from Sir Edward.) We received a male the following year. Since that time, we’ve had 30 pups born at our facilities.

At the San Diego Zoo and Safari Park, our singing dog ambassadors meet guests up close during animal presentations and sometimes make appearances on television.

Once found throughout New Guinea, it is believed that just a few singing dogs remain in the wild, living in damp, mossy, thickly forested highlands. If the New Guinea singing dog is in fact a true wild dog, then its status is endangered. There are only several hundred documented animals in existence, with the majority living in managed-care facilities. Threats to these dogs include inbreeding, breeding with domestic dogs that have been introduced to the island, and habitat destruction.

You can help us bring singing dogs and other species back from the brink by supporting the San Diego Zoo Global Wildlife Conservancy. Together we can save and protect wildlife around the globe.

Number of young at birth: Average of 4

Unlike any other dog species, singing dogs have a unique structure at the back of their mouth that may help them make some of their unusual sounds.

Sonograms show the howl of a singing dog is similar to the song of the humpback whale.

The singing dog’s howl sounds like a yodel, with the tones going up and down.

The New Guinea singing dog is the most recent canid species to be recorded by science. 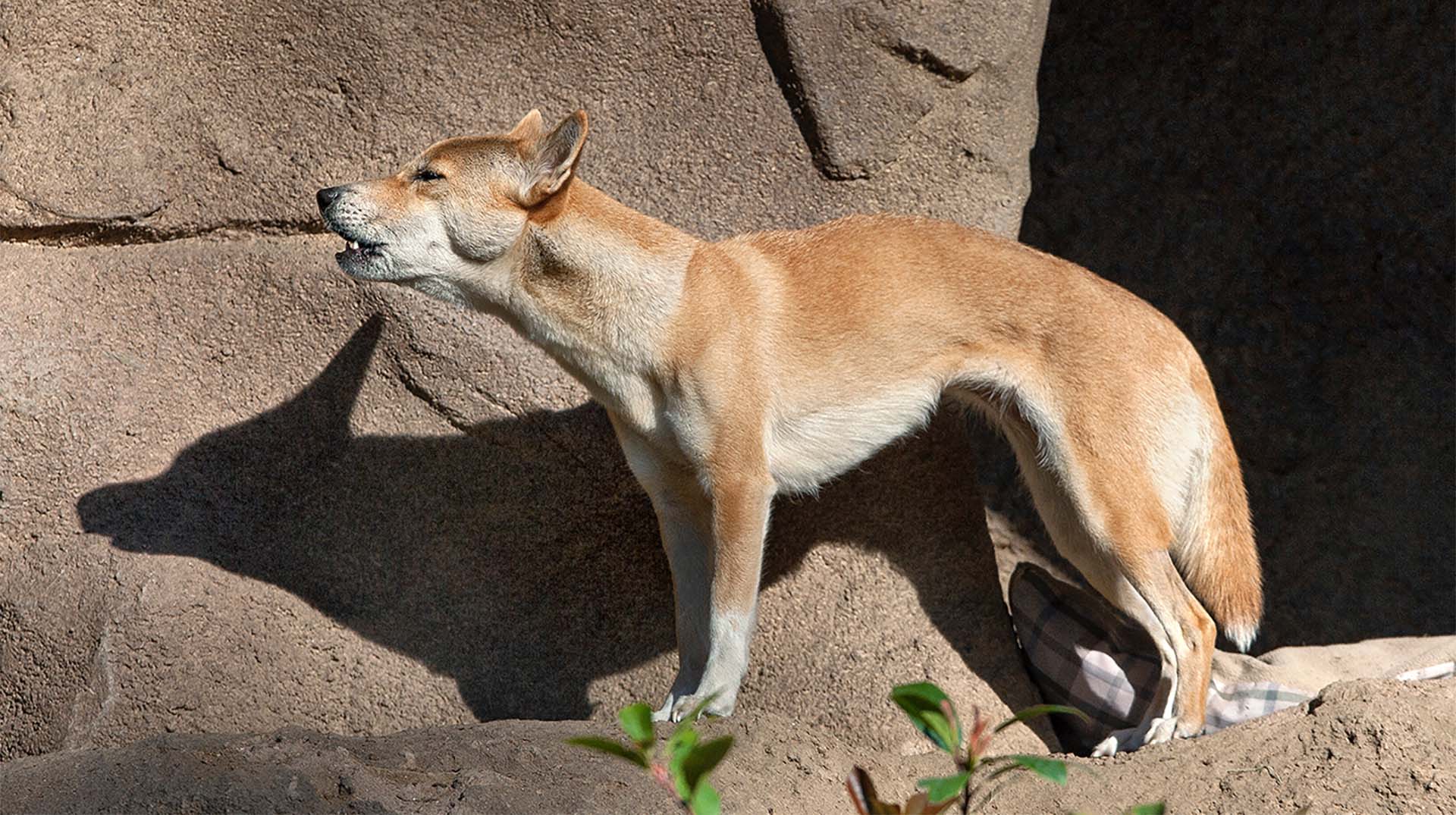 Tales of the Pups

Discover wild and woof-y members of the canid family at the Zoo and Safari Park...