Is a newt a salamander? Yes, but a salamander is not always a newt. Confused? The word "salamander" is the name for an entire group, or scientific order, of amphibians that have tails as adults. This includes animals commonly known as newts and sirens. Most of the animals in the salamander order look like a cross between a lizard and a frog. They have moist, smooth skin like frogs and long tails like lizards. The term "newt" is sometimes used for salamanders that spend most of each year living on land. The name "siren" is generally given to salamanders that have lungs as well as gills and never develop beyond the larval stage. Other names salamanders go by include olm, axolotl, spring lizard, water dog, mud puppy, hellbender, triton, and Congo eel. Whew!

Most salamanders are small, and few species are more than 6 inches (15 centimeters) long. Sirens have only two legs, but the other salamander species develop four legs as adults, with fleshy toes at the end of each foot. Some species, like paddle-tail newts, have fully webbed feet with very short toes for their aquatic lifestyle. Those that like to dig and are less aquatic, such as the tiger salamander, have no webbing at all on their feet.

A salamander’s hind legs grow more slowly than its front legs. (Frogs and toads are just the opposite: their hind legs grow more quickly than their front legs.) All four legs on a salamander are so short that its belly drags on the ground. The axolotl (pronounced AX oh la tul), a very unique species of salamander from Mexico, has the ability to regenerate missing limbs and has become very important to scientific study.

The exception to having legs is found with the sirens. They don’t have hind legs at all! Their long, strong tails are flat to help sirens swim like a fish, with the tail flapping from side to side.

Different members of the salamander order have developed different ways of breathing. Sirens keep their gills all their lives, which allows them to breathe underwater. Others, such as the tiger salamander, lose their gills as they grow older and develop lungs to breathe air. But most, like the arboreal salamander and the California slender salamander, don’t have lungs or gills as adults. Commonly called lungless salamanders, they breathe through their skin and the thin membranes in the mouth and throat.

Newts usually have dry, warty skin, and salamanders have smooth, slick skin. But, of course, there are exceptions! Yet no matter what they may look or feel like, salamanders and newts need to keep their skin moist. If they get too hot and dry, they could die.

Since salamanders need to stay cool and moist  to survive, those that live on land are found in shady, forested areas. They spend most of their time staying out of the sun under rocks and logs, up in trees, or in burrows they’ve dug in the damp earth. Some seek out a pool of water where they can breed and lay their eggs before returning to land. Others, like sirens, olms, and axolotls, spend their entire lives in the water.

There are 16 cave-dwelling salamanders. They have very pale skin, greatly reduced eyes, and have adapted to living in complete darkness in underground pools of water.

There is a species that defies typical amphibian habitat: the Kaiser’s spotted newt. This endangered animal, also known as the emperor spotted newt or Iranian harlequin newt, lives in the Zagros Mountains of western Iran. It is found in streams and pools surrounded by arid scrubland, where water is only present for three or four months a year. Not exactly the shady, humid place you’d expect to find a newt! In late March and early April, when it begins to rain and the streams and pools fill up, Kaiser’s newts emerge to feed heartily and then find a mate. After this burst of activity, summer arrives, and they head underground, burrowing into the sandy soil and entering a state of torpor in which their heart rate and breathing slow, and they do not eat.

Four months of activity a year may not seem like much, but the Kaiser’s newt definitely knows how to make the most of it.

Would you want to eat something that tasted awful or hurt your mouth? Probably not! Salamanders have some special ways to keep from becoming another animal’s next meal. Most salamanders, such as the red-spotted newt, have brightly colored, poisonous skin. The bold color tells predators that the newt is not safe to eat. Many salamanders have glands on the back of the neck or on the tail. These glands can secrete a poisonous or bad-tasting liquid. Some species can even shed their tail during an attack and grow a new one later. The ribbed newt has needle-like rib tips. It can squeeze its muscles to make the rib tips pierce through its skin and into its enemy, teaching it a sharp lesson! The ensantina, a California native, stands high on its legs and waves its tail to scare away danger.

All salamanders are carnivores, but they are seldom in a hurry to catch their meals. Because they move more slowly than other meat eaters, salamanders tend to eat slow-moving, soft-bodied creatures such as earthworms, slugs, and snails. Larger species may eat fish, crayfish, and small mammals such as mice and shrews. They might approach their target slowly, and then make a quick grab with their sharp teeth. Or they might hide and wait for a tasty meal to pass close enough to snatch. Several species can flick out their tongues to catch food as it goes by.

At the San Diego Zoo, we feed our salamanders and newts blood worms, earthworms, pinhead and two-week-old crickets, wax worms, frozen brine, and mysis shrimp. These items are offered on alternate days, five days a week.

Most salamander species hatch from eggs. Female salamanders that live entirely in the water lay more eggs—up to 450—than those that spend some time on land. The California newt lays a clump of 7 to 30 eggs on underwater plants or exposed roots. The eggs are protected by a toxic, gel-like membrane. Lungless salamanders such as the spiny salamander are devoted parents that share egg-guarding duties. They curl their body around the eggs and turn them over from time to time. This protects the eggs from predators and fungal infections. Some mother newts keep their eggs safe by wrapping leaves around each one as they are laid—up to 400 eggs! Salamanders in the larval stage of their development are called efts.

Different salamander species have different life cycles, too. Some breed, lay their eggs, and hatch on land while others, such as some of the newts, breed and lay eggs in the water. When the eggs hatch, the larvae grow up in the water before heading to the land as adults. Still others, such as the giant salamander and the hellbender, spend all the stages of their life cycle in water. Lungless salamanders have eggs that hatch directly into small salamanders, skipping the larval stage entirely, and the axolotl lives out its aquatic life in the larval stage, never developing beyond its larval features, a condition called neoteny.

The San Diego Zoo’s Education Department has reptile ambassadors that are seen by thousands of children each year, through school assemblies, animal presentations, sleepovers, and summer, spring, and winter camps.

Salamander species making their home at the Zoo include Kaiser's newts and fire salamanders. We had our first reproductive success with Kaiser newts in 2011. Our Reptile Walk, which opened in July 2012, features amphibian exhibits where our Kaiser’s newts can be admired.

People are salamanders’ worst enemy. For example, the Chinese giant salamander is at critical risk; it is hunted illegally by humans for food, and its body parts are used in traditional Chinese medicines.

Humans continue to pollute and destroy wetland habitats where newts and salamanders live. Remember, these amphibians need water to survive. Filling in their ponds, using pesticides, and rerouting water for our own needs has caused declines in many salamander populations—more than 70 species are currently listed as being at critical risk! We all need to help conserve remaining habitats and provide new gardens and parks for these unique creatures.

Up to 55 years, depending on species; most live about 10 years

Number of young produced: 1 to 450 eggs are laid, depending on species; fire salamander Salamandra salamandra is a live-bearing species, giving birth to 10 to 30 young

Length: Largest - Chinese giant salamander Andrias spp., with head-to-tail length of up to 6 feet (1.8 meters); smallest - Thorius arboreus, at up to .6 inches (1.7 centimeters); most salamanders are 2 to 6 inches (5 to 15 centimeters)

Salamanders can’t hear sounds, so they don’t make any either. However, some species can hug the ground to pick up sound vibrations with their body.

Kaiser’s newt males undulate their tail to entice a mate, and a willing female responds in kind.

The Pacific giant salamander is the largest land salamander in North America. It can grow up to 14 inches (36 centimeters) long. 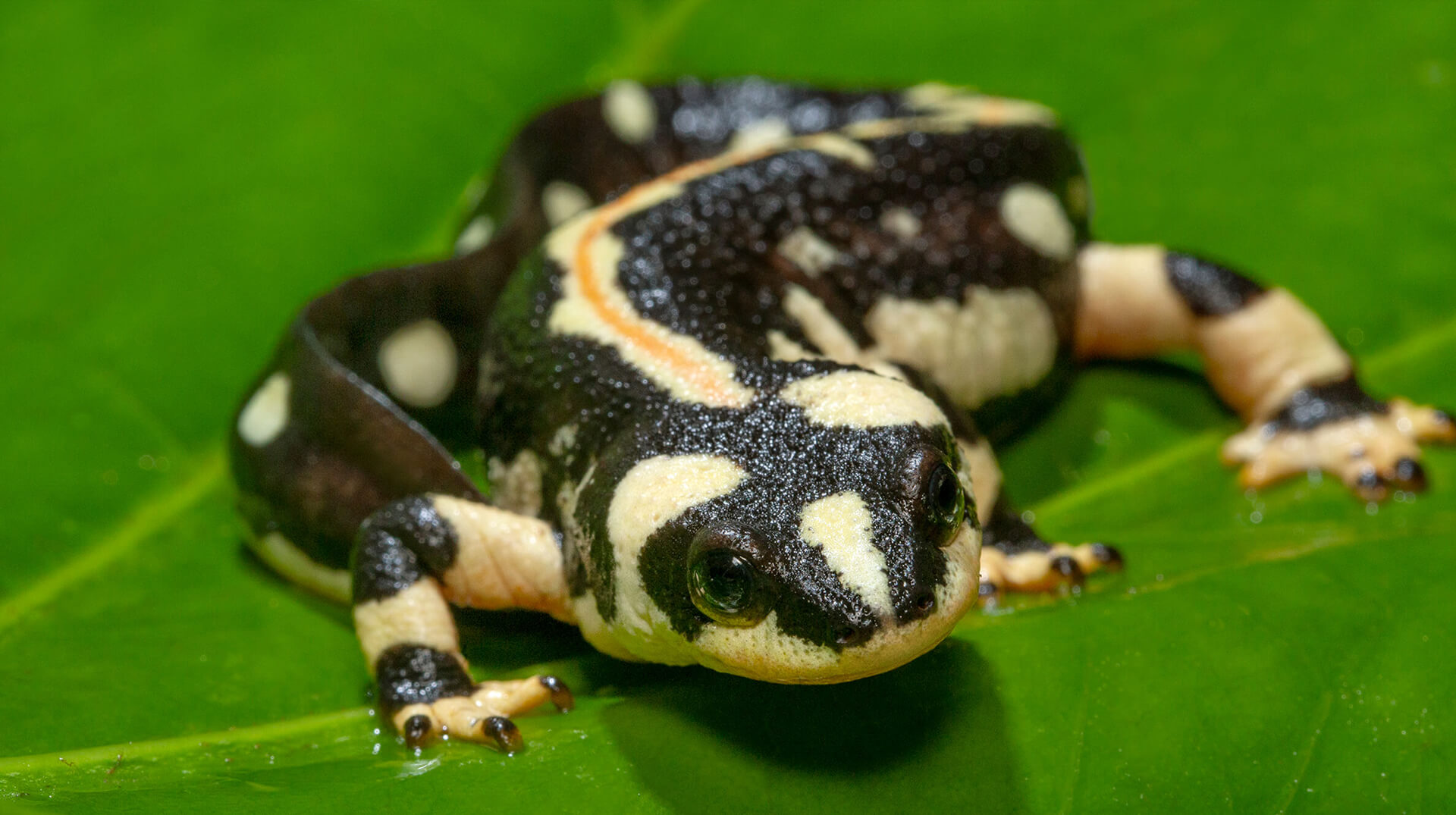 You may not see a salamander in your backyard, but one may have visited—and it might even live there now.