You probably wouldn’t win a staring contest with it, though you’d be hard pressed to look away. Taller than a mailbox, with an eight-foot wingspan, the shoebill is quite a kick to observe! This hefty bird with its lesson-in-gray plumage is endemic to swamps and wetlands of Central and East Africa. Solitary in nature, even when paired with another, the birds like their space and will feed at opposite ends of their territory.

But what really gives the shoebill a leg up is its big, bulbous bill, which serves many purposes. Over 7 inches (19 centimeters) long, and nearly as wide, it is also cavernous inside—and a handy container for fish prey, as well as water to douse its eggs or chicks with, as needed. Oh, and it’s a musical instrument! Shoebills perform bill clapping to drive away interlopers and woo mates; males and females have different tones to their “clapping.”

A league of its own.  Once classified as a stork—shoebill stork or whale-headed stork—it is now in a Family of its own: Balaenicipitidae. It shares some behavioral and anatomical characteristics with storks, but it is more like herons (Ardeidae), with its powder-downs (a special type of down feathers located on the breast and belly) and its habit of flying with its neck retracted. Further muddying the waters, the shoebill’s mighty skull resembles that of pelicans, but that could be due to convergent evolution and both birds’ violent method of fishing (see Diet section below).

Big bird.  Shoebills are large-bodied, sturdy birds. A soothing combination of blue-gray, dark gray, and slate color make up most of its plumage. The belly is white, with some elongated feathers on the breast, with dark, contrasting shafts. It has a small, shaggy nuchal crest and piercing eyes that are yellowish or grayish-white.

Its unusual large, splotchy bill has sharp edges, which help in the swift decapitation of prey, and also in separating out vegetation that may be grabbed with the fish. The upper mandible ends in a sharp nail, which helps shish-kabab slippery prey.

The shoebill’s wings are well suited for soaring; they are strong enough to enable the bird to lift off near vertically, though it requires a powerful leap and a few heavy wing beats to catch a thermal. It’s wings help it keep its balance when clambering over shifting, wet vegetation. It has long legs and long toes, which also help it traverse sodden, marshy habitats. 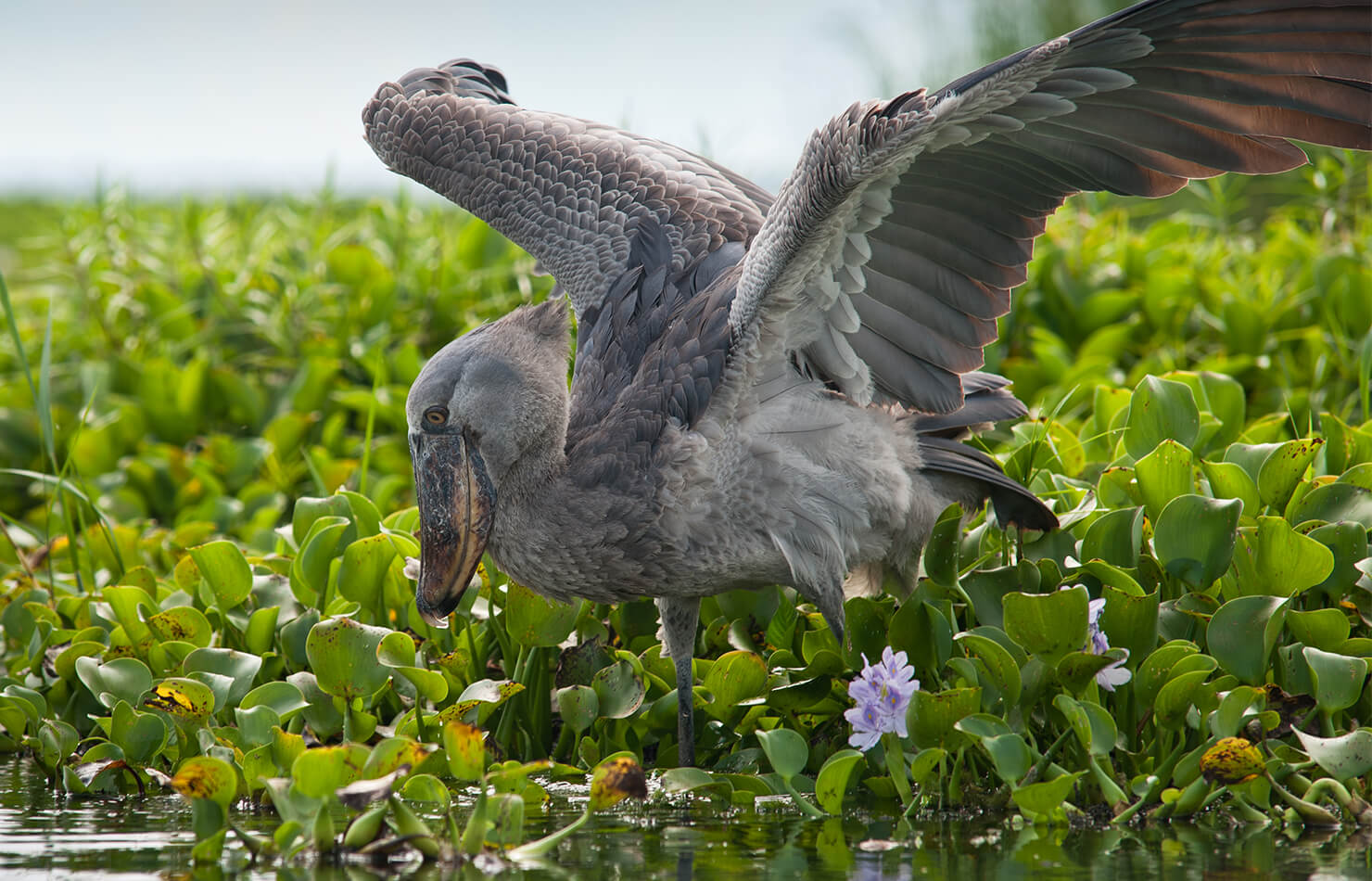 Wet and wonderful.   The shoebill favors the vast papyrus swamps of the Sudd, in northern East Africa. Shoebills stake out overspill areas, where water is moving slowly past toward lakes, carrying with it lots of delicious fish. In Uganda, it is found along marshy edges of lakes, in areas grown over with reeds, papyrus, and grasses, for cover and nest material.

Its “collapsing” fishing technique is not effective in deep water, so this bird sticks to the shallows, mostly. Waters with low oxygen content are favored hangouts, as fish need to surface more often, and possibly meet the gaping maw of a hungry shoebill. While they tend to steer clear of human contact (rightfully so), the main goal is to be invisible to its prey below the surface.

Soggy comfort.   Shoebills nest atop floating vegetation and gather plant material from surrounding areas to construct their nest. They tend to use deeper areas of swamps, tucked into tall, dense vegetation, away from disturbances. Deeper waters take longer to dry out and are avoided by predators and returning farmers, with their livestock and fires.

What’cha doin?   Shoebills are diurnal, and only occasionally hunt at night if the moonlight is bright enough. While it may perch or roost in trees, it is more often in or near water. It spends a great deal of time motionless—it can be difficult to tell if the bird is fishing or resting! It tends to be slow moving, except in the moment of collapsing on its prey with lightning speed.

Staying cool entails urohidrosis, meaning urinating on its legs, and the inevitable evaporation has a “chilling” effect on the bird. Like pelicans and storks, shoebills also partake in gular fluttering to release excess heat.

Gone fishing.  The shoebill’s sturdy, reinforced bill is crucial, given the bird’s hunting technique. Standing stock still, once it detects a fish, the shoebill is all in—swiftly collapsing its entire body weight at the prey item, with its bill taking the brunt of the impact. Lungfish, catfish, and tilapia are common food items, as well as water snakes, frogs, monitor lizards, and young turtles. Less common are young water birds and crocodiles.

Shoebills are “stand-and-wait” or “wade-and-walk-slowly” hunters. The shoebill holds its bill vertically downward, out of the way of its binocular vision. Prey detection seems to be visual, but hearing may prove useful as well.

The bill, please.  When a food item is spotted, the shoebill jerks its head forward, lunging full speed ahead, lurching into the water to engulf the fish (and often plenty of vegetation) with its bill. If successful, the shoebill moves its mandibles from side to side to discard excess vegetation, and the fish is swallowed headfirst (unless it’s been decapitated first). A meal is followed up with a long swig of water.

Shoebills defend their favorite feeding areas from conspecifics—eating alone is a way of life! They may start feeding when the sun comes up, but they don’t dine in earnest until after 11 a.m. In a pinch (or during incubation time), a shoebill can survive for over four days without food.

Applause!  As stealth hunters, it pays to be mostly silent, but shoebills can create quite a clatter at the nest as they perform their distinctive bill clapping. Adult birds have also been “caught” whining or mewing at the nest; young can make a hiccupping sound when begging for food.

Nice to meet you.  Breeding season is synched to local water levels—it typically begins as the dry season starts, so that the youngsters will fledge at the end of the dry season, as the rains begin. (But shoebills in Uganda are not that forward thinking, and their breeding season coincides with the main rains.) Shoebills are monogamous, non-migrating birds that seem content give each other their space when foraging.

Nest sites are established and hotly defended from conspecifics with bill clattering and a slowed-down version of its hunting “collapse” (ouch!). If the rival is still undeterred, the defender may leap in the air and crash down on the invader’s back. Little is known of their courtship behavior, but it is thought to contain bill clapping and head bobbing. Males and females may alternatively soar over their established site, perhaps aerial advertising their ownership.

Eggs-actly!  The shoebill’s nest is built on a pad of floating vegetation or a genuine island, like an exposed termite mound. Among the reeds and papyrus, it is well concealed. The shoebills trample down the vegetation, establishing a nest footprint. The they collect plant matter and anchor the base into the substrate, they eventually create a large, flat mound of aquatic plant material. As they add to the nest throughout the breeding season, floating nests may sink deeper into the water and require adding on. Ideal, secluded nest sites may be used year after year.

Shoebills lay one to three eggs (usually two), at intervals of up to five days apart. Eggs are initially chalky bluish-white, but quickly become stained brown. Both parents share in the 30-day incubation duties. Eggs are frequently turned with the adults’ feet or bills, and they are cooled regularly—sometimes four to five times a day!—with water doused on the nest from the shoebill’s bill.

Fluffy chicks.  Shoebill chicks are covered in thick, silvery-gray down and already have a wide gape, but that unmistakable bill won’t start to bulge for about another month. Parents provide mashed-up food for the chicks for the first month, then leave prey in the nest for the youngsters to swallow. Initially, they need only three prey items per day; but by the time they fledge, they need to be fed five to six times a day! Fledging occurs at around 95 days of age; they are independent at 125 days.

Exact breeding success data is not known, but usually only a single chick survives. Should that one perish, they do not lay a replacement clutch.

This unusual bird is classified as Vulnerable by the International Union for Conservation of Nature (IUCN), which estimates that there are 3,300 to 5,300 mature shoebills remaining. The population continues to decline due to habitat degradation and loss, disturbance (hunting and egg collection) by humans, and the illegal bird trade.

You can help. By supporting San Diego Zoo Wildlife Alliance, you are our ally in saving and protecting wildlife worldwide.

Up to about 35 years

With heat being a major threat to its eggs and young, that big bill also serves as a canteen, bringing water to shower over its nest.

The shoebill’s dramatic bill is said to resemble a Dutch wooden shoe.

Their hunting tactic is sometimes called the “freeze and seize” strategy.