Safety in numbers: A “kat” is not a “cat” when it’s a meerkat, a vital, clever, and amazing weasel-like animal that is a member of the mongoose family. Most people know meerkats from the character Timon in The Lion King animated movie. However, instead of spending all their time with a warthog, most meerkats live in underground burrows in large groups of up to 40 individuals called a gang or a mob. For meerkats, there isn’t just safety in numbers—there’s also companionship. The mob is made up of several family groups, with one dominant pair that produces most of the offspring, but they don’t have to be related to belong to the same group. Meerkat mobs spend a lot of their time grooming and playing together to keep the family as a tight unit. This community existence helps the meerkats survive.

Although they are excellent diggers, meerkats usually live in burrows dug by other animals such as ground squirrels. These burrows have an average of 15 entrance and exit holes, with tunnels and chambers at several levels, some as deep as 6.5 feet (2 meters). The deeper tunnels stay at a constant, comfortable temperature, whether it's hot or cold outside. A meerkat mob has several burrow systems, complete with toilet and sleeping chambers, within its territory and moves from one to another every few months.

Meerkats have scent pouches below their tails and rub these pouches on rocks and plants to mark their territory. The territories of different groups often overlap, resulting in constant disputes. When the two groups meet for a face-off, the results can be tragic. Meerkats are vicious fighters that often kill each other in these skirmishes. Knowing the high cost of an all-out war, they try to avoid serious conflict if possible. Usually, a lot of aggressive posturing and bluffing precedes any physical contact. These wars can look a bit like the human battles of yesteryear: both sides line up across a field and, at the right moment, charge forward with leaps and bounds, holding their tail rigid and straight up in the air. Every third or fourth leap, they arch their back and thrust their rear legs backward like a bucking bronco. Whichever side has the most threatening display in their charge may “psych out” the opponents. Yet meerkats groups have been known to accept outside individuals into their mob, and they sometimes share their burrows with yellow mongooses.

Unfortunately for meerkats, they are a tasty treat for larger carnivores, especially jackals, eagles, and falcons. However, meerkats have developed a way to forage in relative safety: adults take turns acting as guard while the others can look for food without worries. The guard climbs to the highest rock, termite mound, or bush he or she can find, stands upright on two legs, and then announces the beginning of guard duty with a specialized call. A low, constant peeping, known as the watchman's song, is made when all is well.

If a predator is spotted, the guard alerts the others with a bark or whistle. There are different calls for land predators and for those coming from the air. When the alarm is raised, the meerkats usually run for the nearest hole, called a bolt hole. These are special tunnels with wider openings designed to hold a crowd of meerkats at once. Meerkats memorize the locations of thousands of bolt holes within their territory and are able to run to the closest one at a moment's notice. A meerkat mob sometimes stirs up dust to create a cover, or the mob may stand together to look larger, acting fierce to scare off the predator.

Meerkats have been known to kill venomous snakes, but they don’t accomplish this task alone—they work as a mob. Some snake species feed on meerkats and slither into their underground tunnels, looking for a warm meal. Because of this, meerkats do not tolerate any snakes in their midst. They attack simultaneously and bite the snake wherever possible. It doesn’t take long for the snake to tire and become overwhelmed by the unrelenting gang. These meerkats mobs have been known to chase off many would-be predators much bigger than themselves.

Meerkats are diurnal: once the sun is up, they carefully emerge from their burrow and spend some time sunbathing and grooming. Meerkats have thin fur and dark skin on their stomachs that helps them control body temperature. They can lie on their backs and get quickly warmed by the sun or lie stomach down on a cool rock in the heat of midday. Once warmed up and ready to go, the meerkats forage for most of the day, perhaps stopping in the shade or a burrow during the hottest hours. Then they return to the main burrow to snuggle up for the night.

Many adaptations help meerkats live in their arid, dusty environment in southern Africa’s Kalahari Desert. Dark patches around their eyes act to cut down on the sun’s glare, and long, horizontal pupils give meerkats a wide range of vision. Meerkats are built for digging and have a special membrane that can cover the eye to protect it while burrowing. These small diggers also have ears that close to keep out the sand while at work. In addition, meerkats have four toes (most mongoose species have five) on each foot and very long, nonretractable claws to help them dig.

No prey is safe from meerkats! With their excellent sense of smell, they can even find their food when it is hiding underground. Meerkats can dig very quickly to find insects (the biggest part of their diet), spiders, snails, rodents, birds, eggs, lizards, and scorpions. They have a home territory of about 4 square miles (10 square kilometers) or more and hunt in a different section each day, returning to the first area after a week. Each meerkat must find its own food, but they may share the task of capturing and eating a large lizard or other large food item. At the San Diego Zoo and the San Diego Zoo Safari Park, the meerkats are fed a ground meat diet made especially for zoo carnivores, cat kibble, mealworms, crickets, and small amounts of produce.

Mom's in charge: Meerkats have a matriarchal society, with adult females generally slightly larger than the males. The dominant female can have several litters a year, but usually she has babies, called pups, during times when there is plenty of food, which is generally during the rainy season (November through March). Pups are born with eyes and ears shut and are mostly hairless at birth. Their eyes open after two weeks, and pups start eating food other than milk at three weeks. When they are four weeks old, the pups first venture out of their den; they are weaned by nine weeks.

Young meerkats do not know what kind of food to eat, so their mother or another adult teaches them. Mom brings home whole food such as an insect or lizard and leaps around in front of the pups until they take the food from her mouth. She even brings home scorpions with their tail bitten off so the young can learn how to kill them without getting hurt. While adult meerkats have some immunity to scorpion stings, a scorpion’s large pincers can still do plenty of damage, and the pups have to learn to deal carefully with this dangerous food item.

In addition to taking turns as guard, meerkats also share the duty of raising the pups and teaching them how to hide, hunt, clean, and defend all that is theirs. The mother needs to spend time foraging to supply her pups with milk, so other females and males stay behind to care for and protect her young. The mob may sometimes decide to move to a different burrow, and these "babysitters" help transport the pups, carrying them by the scruff of the neck. The pups spend most of their time playing, and both pups and adults are very vocal. They make a peeping sound when playing, which rises to a louder twitter when they are excited, and purr when content. The more babysitters there are, the greater the survival rate for the pups.

Since 1983, we have had several exhibits of meerkats. They always make our guests smile as they watch these small, entertaining creatures standing on their hind legs, absorbing the warmth of the sun on their bellies, furiously digging for treats, or comically wrestling with each other. There are meerkats at the San Diego Zoo's African Kopje and in Safari Base Camp at the San Diego Zoo Safari Park. It can be challenging to build a habitat that allows the meerkats to dig to their heart’s content without digging their way out! A wire net lines the bottom of each meerkat enclosure, and each exhibit has some large rocks or man-made termite mound for the meerkat guard to perch atop, ever vigilant as he or she scans the skies for that dreaded bird of prey.

We have been highly successful in breeding meerkats—over 250 have been born in our collection so far! Some of our meerkats have served as animal ambassadors—meeting the public at the Zoo and Safari Park, as well as at schools and television studios—helping us teach people about habitat conservation and the hardships many animals face today.

Fortunately for meerkats, they seem to be doing all right in the wild at this time. Yet movies and television shows have brought meerkats lots of attention, with many people wondering if they can have a meerkat as a pet. Although they may look cute, meerkats—like all wild animals—do not make good pets, and are illegal to own without the proper permits and licenses. Instead, head to your local zoo to enjoy these small creatures in action. They’ll be scanning the skies and watching for you!

Meerkats are known for their daring diet: they are able to kill and eat venomous snakes and scorpions without being hurt, as they have some immunity to the venom.

Able to survive without drinking water, meerkats get the moisture they need from eating roots and tubers as well as fruit such as tsama melons.

The skeletal structure and teeth of meerkats and other mongooses closely resemble those of the earliest carnivores. 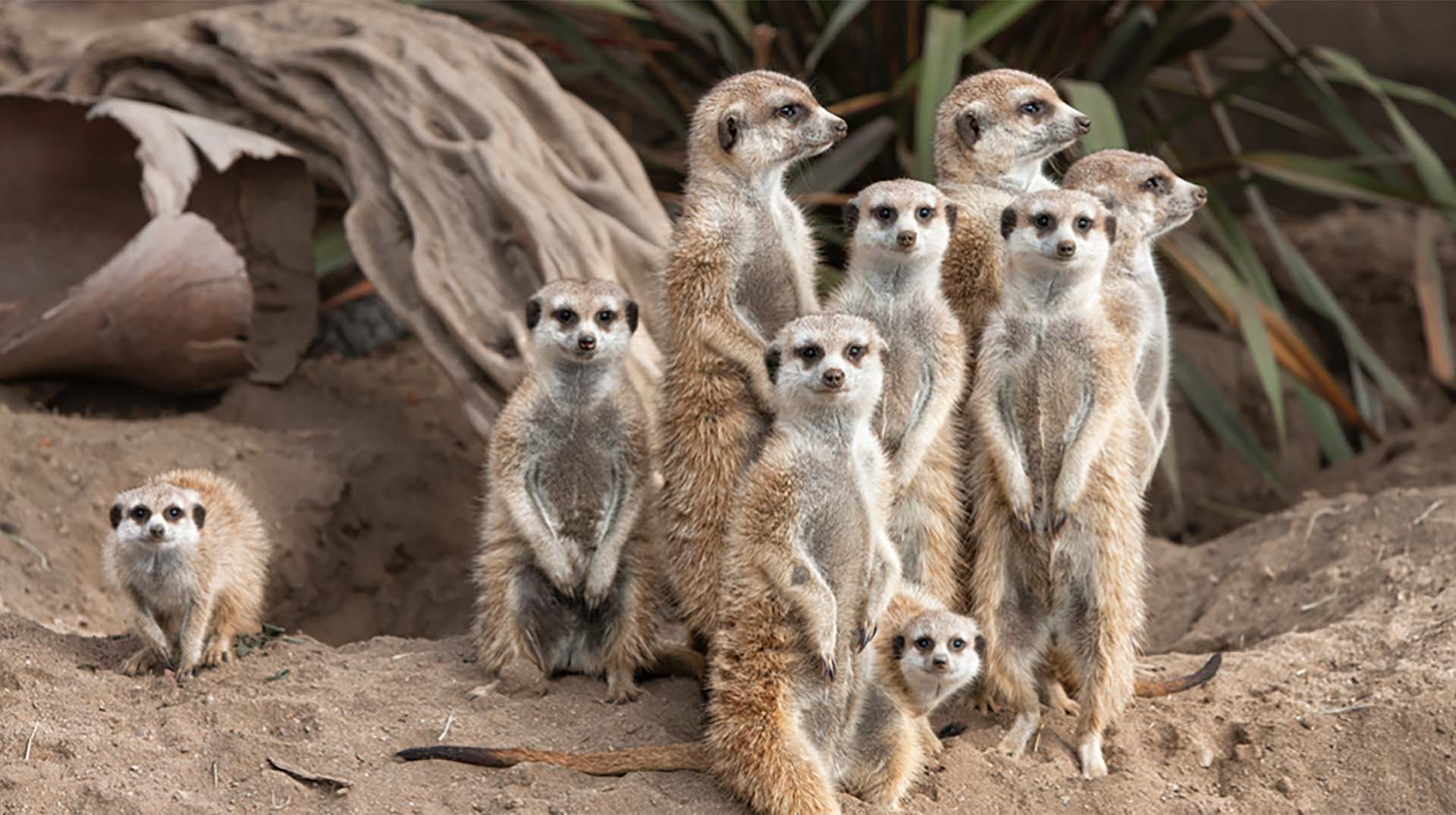 For many people, meerkat watching is a workout for the eyes...