Black and white and orange all over: The beautiful, striped coat and that powerful, mesmerizing gaze places the tiger among the world’s most revered wildlife. It’s a reverence that’s mixed with a bit of fear, an appropriate reaction to a large, well-muscled, swift hunter with 1- to 2-inch-long canine teeth and 3- to 4-inch-long claws. The tiger is a stalk-and-ambush hunter, and the distinctive stripes are good camouflage in the long grass or wooded forests of their diverse habitats. Dark stripes on a pale background break up the tiger’s outline as it lies in wait for prey to come near.

Tigers can also be black with tan stripes, all white (albino), or white and tan. The “white tigers” found in some zoos are not albino but rather the white-and-tan color variation with blue eyes (true albinos have pink eyes).

There are currently six subspecies of tigers, each living in different habitats: flooded mangrove forests, arid forests, tropical forests, and taiga. The different subspecies are found in small areas of Asia, India, and Russia. The largest subspecies lives in snowy areas of Russia. The smallest and darkest subspecies is found farther south, in the jungles of Indonesia. Female tigers are always smaller than males.

Amur or Siberian tiger Panthera tigris altaica: The largest of the tiger subspecies, males can be as long as a station wagon! These tigers also have the palest orange coat and the fewest stripes, to help them blend in with their snow-covered habitat. As it lives in a very cold climate, the Siberian tiger’s coat grows longer and thicker than other tiger subspecies, and it develops a layer of fat for insulation. There are about 450 Siberian tigers left in their home range of eastern Russia and northeastern China.

Bengal or Indian tiger Panthera tigris tigris: This is the most common subspecies of tiger and is almost as large as the Siberian tiger. About 3,400 Bengal tigers remain in their native habitat of India, Nepal, and Pakistan.

Malayan tiger Panthera tigris jacksoni: This is the subspecies you’ll see at the San Diego Zoo. Fewer than 200 tigers remain on the Malay Peninsula. Of those, only 80 to 120 are breeding adults.

Sumatran tiger Panthera tigris sumatrae: Even though the Sumatran is the smallest tiger subspecies, it’s still a pretty big cat. Imagine a tiger the same length as a school cafeteria table! Its orange coat is darker than other subspecies, as it is native to dark jungle habitat on the island of Sumatra; the sides of the face have longer fur, perhaps as protection against jungle plants. The Safari Park has a small group of Sumatran tigers. About 370 remain in the Sumatran wilderness.

South China tiger Panthera tigris amoyensis: These tigers are slightly smaller than the Indochinese subspecies. In the 1950s, the Chinese government ordered that these tigers be destroyed because they were viewed as pests. They may be extinct.

Tigers are seldom far from a water source; there are Bengal tigers that live in wet mangrove forests along the Ganges River in India. Excellent and powerful swimmers, tigers are often found during the day relaxing or waiting to ambush prey in ponds, streams, and rivers. They seek out water to swim while most cats avoid it. Tigers even have partially webbed toes and aren’t discouraged by a river if there is prey on the other side.

A tiger’s front paws are large and strong to bring down prey. The claws can be pulled inside while the tiger walks, which helps keep the claws sharp. Tigers also use their claws to mark their territory by scratching on trees. Conveniently, this also sharpens the claws.

Tigers are patient hunters and can move slowly and quietly, stalking their prey (usually ungulates like deer and pigs) for 20 or 30 minutes. A tiger’s large canine teeth and powerful jaws are used to grab its prey by the neck and suffocate it. Tigers use their sandpaper-rough tongues to scrape the last bits of meat from the bones of a meal. A tiger makes a kill once or twice a week and eats as much as it can. Using its paws, it then covers the leftovers with grass and dirt to hide it from vultures and other scavengers. The tiger returns to the kill over the next few days for smaller snacks. They prefer pigs and deer, while in some parts of Asia a tiger may bring down a rhino or elephant calf.

Going it alone: Tigers are generally solitary cats, unless a female is caring for her cubs, and maintain a home range that can be several square miles, depending on habitat and the amount of prey available; males tend to have larger territories than the females. The Siberian tiger has the largest range (more than 4,000 square miles or 10,000 square kilometers have been recorded) as food is scarcer, so the tiger has to travel farther to secure a meal. Some tigers defend their territory from other tigers while others often share their range.

A female tiger in estrus leaves urine “messages” on trees and other places to let males know of her reproductive status. Through loud moaning calls, a male and female can find each other for breeding and may stay together for a few days before going their separate ways. Tiger cubs are born small and helpless, but the mother must leave them alone while she hunts. A female can have a litter of up to seven cubs every two years. Typically, she cannot kill enough prey to feed so many hungry cubs, so usually only two cubs survive. At eight weeks old, cubs join their mother when hunting, and at six months they are ready to learn how to kill cattle, deer, and pigs. 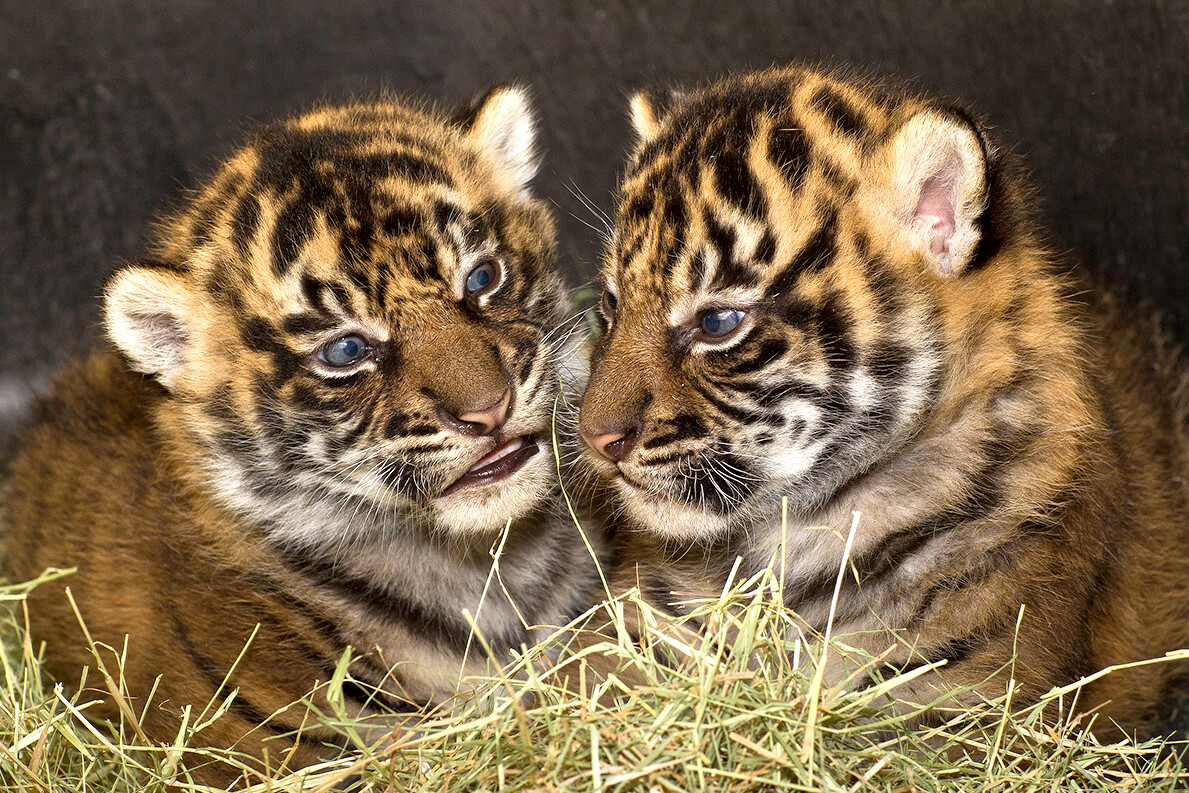 Cubs seem to know from the start that they are tigers and practice their hunting skills with each other in what could be considered a form of extreme tag, since the cubs chase, tackle, and wrestle each other, growling ferociously all the while. They often practice ambush skills on their resting mother! Most tiger cubs are weaned when they are about five or six months old, but they usually stay with their mother for about two years and don’t hunt on their own until they leave. Yet up to half of tiger cubs born do not survive their first year, succumbing to starvation, disease, competition for prey, accidents, and injuries while hunting.

Although not as social as lions, tigers vocalize more frequently and have a wide range of vocalizations, including roars, grunts, hisses, and chuffles. A roar is made when challenging other tigers at long range, defending a meal, or attracting a breeding partner; a chuffle is a friendly greeting, usually used between a mother and her cubs. Other forms of tiger communication include spraying urine, leaving piles of feces where they can be seen, and clawing trees or the ground—all to say “this area is mine!”

Tiger cures? There are six subspecies of tigers, all highly endangered due to human hunting and encroachment on their forest habitat. To people of many cultures, the tiger is a symbol of strength and courage. But if tigers are so admired, why are they endangered? For many years, tigers have been hunted for their fur and other body parts, some of which are used in native medicines. In some cultures, people hunt tigers for sport or to demonstrate their own bravery. Tiger hunting continues today because the body parts can be sold for a lot of money. Several traditional medicines use tiger parts as a cure for all kinds of illnesses, from pimples to toothaches. These “cures” have never been proven to be effective.

Tigers also suffer from habitat loss. When people move into areas where tigers live, tigers are forced into smaller and smaller areas where there may not be enough food for the big cats to survive.

Conservation scientists estimate that there are no more than 4,500 tigers in the world. But there is a lot of work being done to make sure that tigers will survive. In the early 1970s, India began passing laws against killing tigers. Since then, other countries that are home to tiger populations have passed similar laws. Many countries around the world, including the US, have passed laws to stop the sale of products made from tiger parts. International projects exist that help protect tiger habitat. Zoos help tigers through breeding programs and by teaching people around the world about these cats.

San Diego Zoo Wildlife Alliance has teamed with Way Kambas National Park in Sumatra, Indonesia, a major habitat for Sumatran tigers Panthera tigris sumatrae. We are funding studies to determine the number and distribution of these critically endangered big cats.

Each tiger has its very own stripe pattern. Conservation scientists who study tigers can identify individuals by their unique stripes.

Tigers earn their stripes for their own kind of strength: they can carry something twice their own body weight 10 feet (3 meters) up a tree.

A tiger’s night vision is six times better than a human’s.