Very old school.  While all birds are descended from dinosaurs, the mysterious cassowary is thought to be more similar to ancient dinosaurs than other bird species. Large bodied with fierce claws, these flightless birds also have casques, a helmet-like structure atop the head, which many dinosaurs are believed to have had.

Its booming call, which carries through the dense foliage, also harkens back to the dinosaurs. The loud, deep call, parts of which are too low in frequency for humans to hear, is likely amplified and projected through its casque. Some scientists believe the purpose of the bird’s helmet is to protect its head as it runs through the tangled forest, while others say it reflects the animal’s dominance. Whatever its purpose, the casque is a stunning “accessory”! 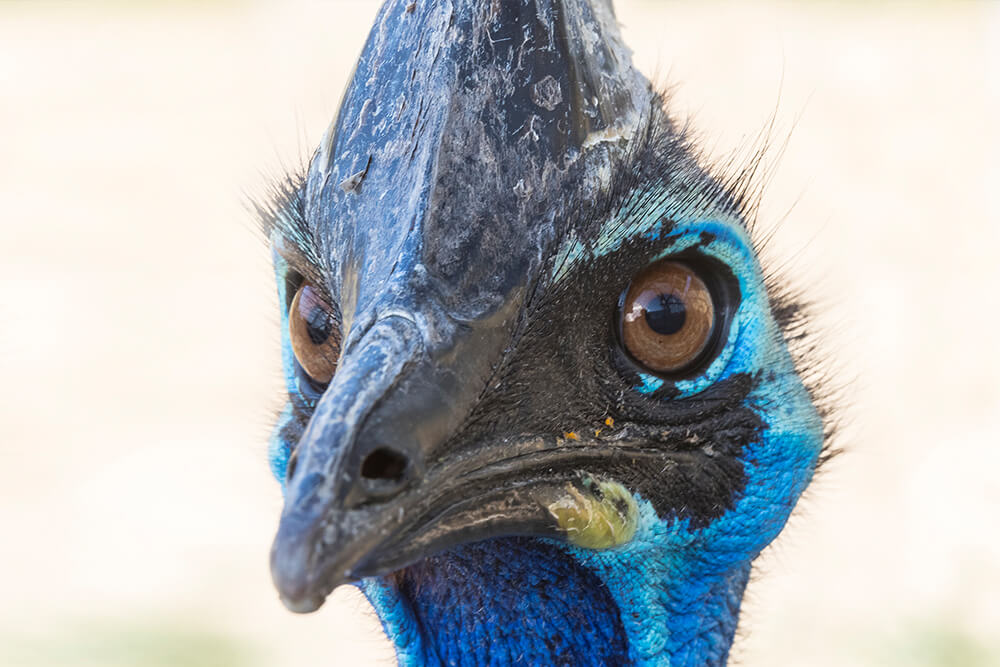 Birds of a feather.  The cassowary has black, satin-like feathers on its neck, body, and tail. These drooping, shimmering feathers are similar to feathers of emus and ostriches. Skin on the cassowary’s neck and face is brightly colored blue and red. In the northern cassowary, skin may change color with mood.

It is closely related to the emu and, more distantly, the ostrich. These large, flightless birds belong to a group called the “ratites,” which are adapted for walking and running, rather than flying or using their wings to swim (like penguins). The ratite group includes emus of Australia, kiwis of New Zealand, ostriches of Africa, and rheas of South America.

The cassowary is active mostly during the day (diurnal), walking slowly along in search of fruit and other nourishment.

Wonderous wattles.  Cassowaries are among the largest birds on the planet. The southern cassowary is the largest species, reaching 5.8 feet (170 centimeters) in height. Males weigh up to 121 pounds (55 kilograms) and females reach about 167 pounds (76 kilograms). They have two wattles, a sagging, jiggling, colorful piece of red skin below the chin on the front of the neck. Due to this conspicuous feature, it can also be called the double-wattled or two-wattled cassowary.

The northern cassowary is slightly smaller, at less than 5 feet (1.5 meters) in height. It sports a single, wart-like wattle at the base of the neck (some individuals may have a couple of bonus wattles). The smallest cassowary variety is, not surprisingly, called the dwarf cassowary. These little guys reach a respectable 3.5 feet (110 centimeters) in height and weigh almost 63 pounds (29 kilograms). Its wattle is either nonexistent or a tiny “nub.”

The low down.  Cassowaries produce some of the lowest-frequency sounds of any bird. Given its solitary behavior, the low frequency may help the sound travel a greater distance to the closest cassowary, so it can respond appropriately—like avoid them completely or pursue mating possibilities. Most calls are associated with breeding, including the “boo-boo-boo” song with accompanying stamping feet.

These birds also make a low roaring call, often when no other cassowaries are around. When threatened, they may use a “stretch display” with raised feathers, extended “wings,” and neck and body stretched vertically to appear even larger. It may inflate naked skin on its neck for good measure.

Colorful skin around its neck and face is pigmented in a palette of blues, turquoise, and purple with pink to red highlights. While the casque is dark-colored on the outside and protected by a dense bone layer resembling a horse hoof or tortoise shell, the inside is made up of fragile, spongy honeycomb tissue with more air spaces toward the rear of the structure. The casque may be the product of mutual sexual selection, used by both sexes to evaluate mate quality. However, keepers have noted some “crummy casques” that are perfectly attractive to mates.

Right at home. Southern cassowaries inhabit rain forests of northeastern Australia and the island of New Guinea, as well as the Indonesian islands of Ceram and Aru. Generally, cassowaries are associated with dense, tropical rain forest, with a penchant for old growth forest. The southern variety may also be found in lowland forests, savannas, forest edges and riverbanks, and even mangroves and fruit plantations.

The three cassowary species distributions generally do not overlap; they occur at low population densities.

The skinny on skin.  Cassowaries have a short, black bill. It can open its mouth wide to swallow large food items whole. It has long, thick, powerful legs that are gray in color. Its large feet have three toes, with a secret weapon being a five-inch-long dagger-like claw on each foot. Legs and feet are covered in protective armor-like scutes.

Cassowaries mostly feast on fallen fruit, snails, and fungi, but when they have high-protein cravings, they feed on small mammals and reptiles, dead or alive. They use their feet to scour the forest floor for a meal. Being largely dependent on fruit, they need diverse forest habitat with plants that supply food all year long. One study in Queensland revealed that southern cassowaries consume fruits of at least 75 different types of forest plants. When wild food becomes scarce, cassowaries will raid gardens, orchards, and commercial crops like bananas and mulberries.

Watch your step.  Cassowaries leave large piles of colorful dung throughout the forest, which contains seeds from the fruits they have swallowed whole. From these dung piles spring the next generation of plants! Scientists believe this keystone species helps spread the seeds of several hundred rain forest plants, moving seeds far from the parent plant and helping to regenerate the ecosystem.

At the Zoo, cassowaries are given a variety of fruits, pellets, and protein, to keep them healthy. They need to eat a great deal of food (often 10 percent of their body weight!), as it passes quickly through the digestive tract.

This diurnal species spends about a third of its time foraging for fruit and other tasty sustenance, which it does by wandering slowly along established tracts, picking up food with its beak, and tossing it in the air so that it falls into its mouth and is swallowed whole. Cassowary scat is colorful and packed full of seeds and partially digested fruits, which helps regenerate the forest.

They can be found near streams where they drink water either standing or sitting. Cassowaries are good swimmers and enjoy bathing in shallow water and mud wallows.

Going solo. Cassowaries tend to be solitary except during breeding and when males are rearing chicks. The home range of females is three to six time larger than that of males; their home ranges may overlap with several males. Females are dominant to males—but during non-breeding times, they tend toward a solitary existence. 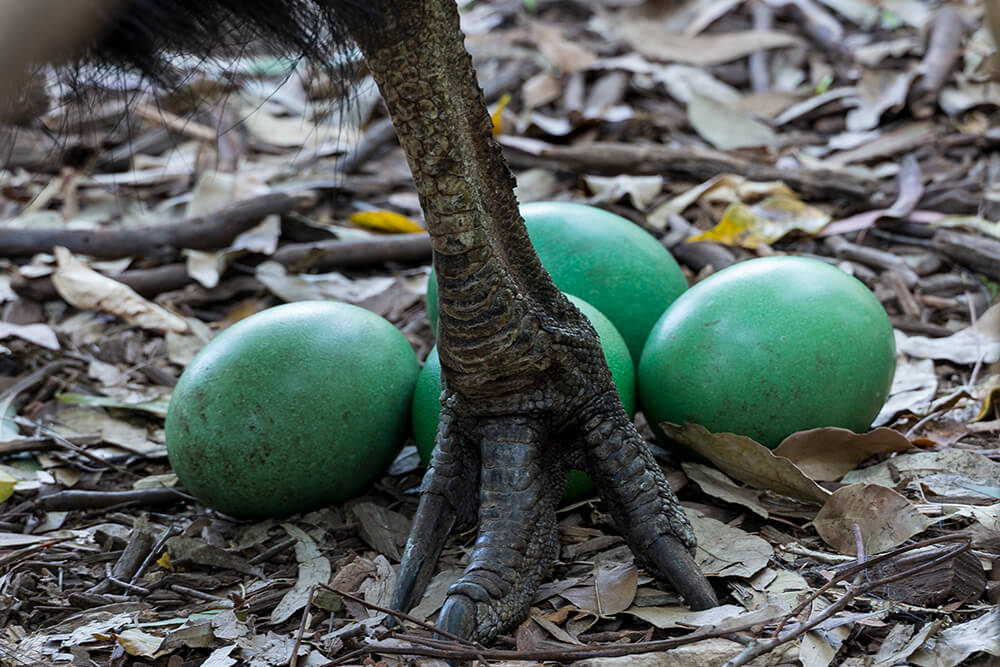 Green eggs and Dad.  Cassowaries are shy, solitary animals that have complex breeding systems. The males breed with one female, so the entire clutch is “his” and worth protecting. The nest is a simple indentation in the ground and quite inconspicuous in the gloom of the forest. Southern cassowaries lay three to five green-colored eggs.

As in rheas and emus, it is the male cassowary that guards and incubates the eggs; he will guard the chicks and protect them from predators for about nine months as they learn to forage. By the time the young are independent, they are nearly full-grown and able to defend themselves.

There is a Species Survival Plan (SSP) in place for the southern cassowary, and they are managed under the Struthionformes Taxon Advisory Group. The North American Regional and International Studbooks are maintained at the San Diego Zoo.

The first known cassowary chick to hatch and thrive in captivity was at the San Diego Zoo in 1957.

Vulnerable. Cassowaries are listed as Vulnerable on the International Union for Conservation of Nature (IUCN) Red List of Threatened Species and are considered endangered under Australian federal law. In Australia, the birds numbered about 2,500 in 2010, while mature cassowaries living in New Guinea are estimated between 6,000 and 15,000 adults. The southern cassowary declined in Australia as a result of deforestation and development, while hunting posed the gravest threat to them in Papua New Guinea and Indonesia.

San Diego Zoo Global is proud to share this unusual species with visitors at the Safari Park, so people can learn about them and appreciate their flightless existence.

You can help us protect wildlife around the globe by supporting the San Diego Zoo Global Wildlife Conservancy at endextinction.org.

Up to 40 years in captivity; unknown in the wild

Incubation: About 50 days (by the male)

The casque of a cassowary is made of a tough, elastic, foam-like material.

The first known cassowary chick to hatch and thrive in captivity was at the San Diego Zoo in 1957.

The southern cassowary can sprint up to 30 miles per hour (48 kilometers per hour) for short periods.

Only the ostrich is heavier than the southern cassowary. 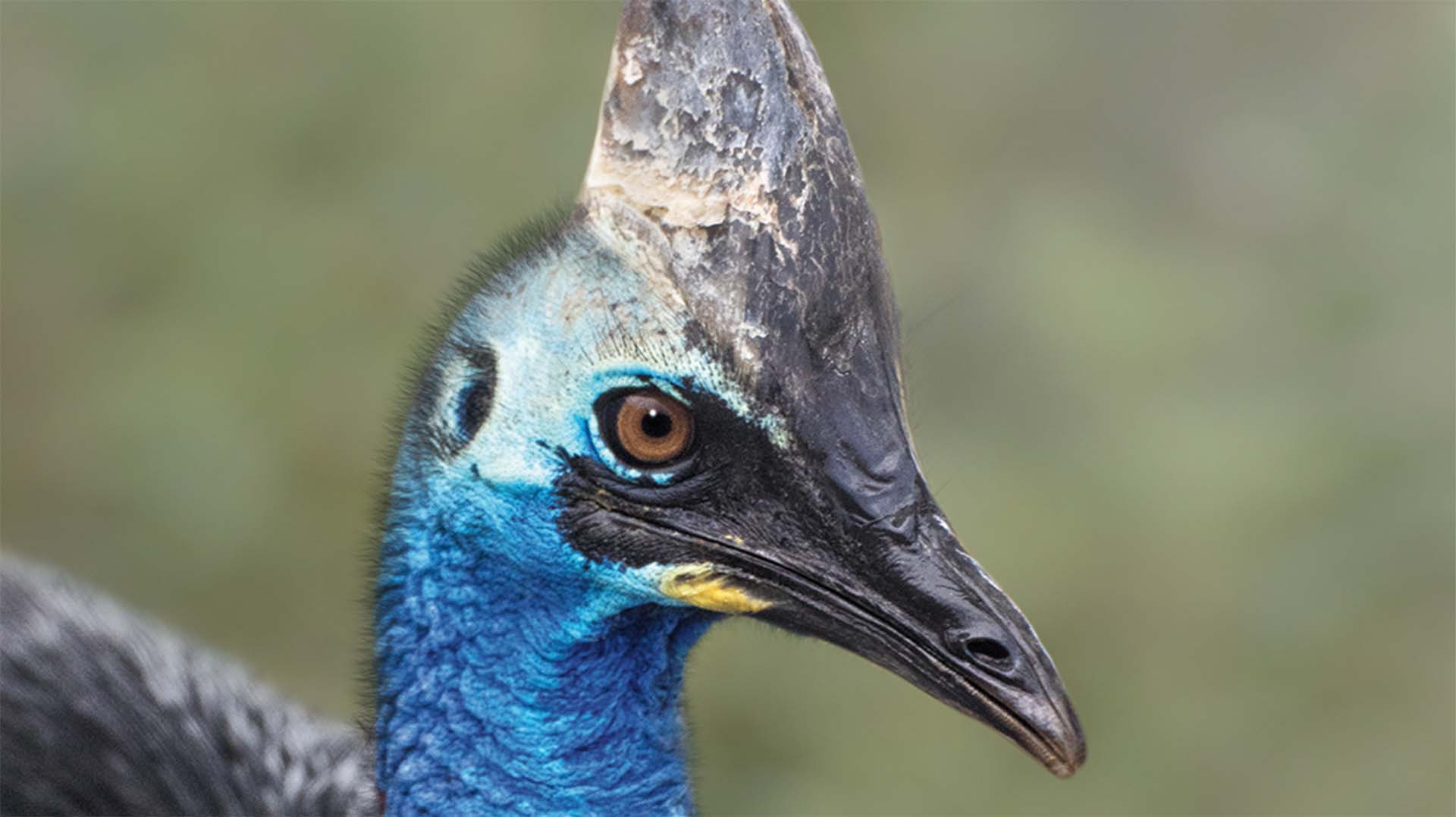 The Casque and the Cassowary

Normally, they are shy and reclusive—but once they get riled up, you'd best "Be Cass-o-wary" (as local Australian signs advise)...