A well-known mammal: The word kangaroo often brings to mind a picture of a big, bounding critter with long ears and a baby, or joey, peeking out of its mother's pouch. Maybe you envision Kanga and Roo from A. A. Milne's Winnie the Pooh books, or H. A. Rey's Katy No-Pocket from the story of the same name? Either way, kangaroos are perhaps Australia's best-known animal and are found in stories, movies, and even as sports team mascots the world over!

The kangaroo's family name, Macropodidae, means "big feet," a great description for kangaroos and their relatives. Kangaroos, wallabies, wallaroos, quokkas, pademelons, potoroos, honey possums, and tree kangaroos are all macropods. Confused about the difference between kangaroos, wallaroos, and wallabies? That's understandable! There are more than 50 species of these marsupials, and they vary in size from critters you could hold in your hands to the giant red kangaroo that stands as tall as an adult person.

The main difference between a kangaroo and all the others is size: the six largest macropods are referred to as kangaroos. Otherwise, they are quite similar. In most species, the hind legs and feet are much larger and more powerful than the forelimbs. Their tail is long, muscular, and thick at the base, helping the animal balance and turn during hopping and providing support when it rests.

The kangaroo's muscular design lets it move in a way called saltation that is unique to macropods. This means that it hops, both feet pushing off the ground at the same time. The larger kangaroos can cover over 23 feet (7 meters) per hop when cruising at top speed and have been clocked at more than 30 miles (48 kilometers) per hour in short bursts!

Like a perpetual-motion machine, hopping kangaroos are able to keep moving without expending much energy. In fact, kangaroos actually burn less energy the faster they hop, at least up to their cruising speed of 20 miles (32 kilometers) per hour. In addition to powerful leg muscles, kangaroos have a huge set of tendons in their tail that attach to the hipbones. The combination of these muscles and tendons working together helps kangaroos move efficiently. Wallabies, while smaller in stature, are built and hop in a similar manner.

When a kangaroo senses danger, it alerts its fellows by thumping its feet loudly on the ground! It can also communicate by grunting, coughing, or hissing. A mother may make a clicking or clucking sound to call her young. The kangaroo’s hands may be used to fight; this is called boxing. Dingos are a red kangaroo’s only predator.

The best-known macropods are the three widespread and common species of large kangaroos. The largest is the red kangaroo, which is found most often on the open plains of inland Australia and can live on very little water. Maroon with a white face and belly, males are often referred to as red flyers. This species can be over 6 feet (1.8 meters) tall and weigh up to 200 pounds (90 kilograms)! Females, sometimes called blue flyers, are bluish gray and are smaller and faster than the males, reaching speeds of up to 30 miles (48 kilometers) per hour. Red kangaroos can, in an emergency, leap across the outback in 10-foot-high (3 meters) and 39-foot-long (12 meters) bounds. Talk about a spring in your step!

Red kangaroos prefer living in open, grassy plains, although they may also be found in scrubland and desert habitat; the slightly smaller gray kangaroos, which need more drinking water than reds, usually inhabit woodlands, though they graze in grassy meadows at night. Those living in the eastern coastal regions have long, silver-gray hair, while those found inland have short, dark gray hair.

All three of the large kangaroo species are closely related to the smaller wallabies and wallaroos that thrive in habitats ranging from wet forests to arid grasslands. There are brush, scrub, swamp, forest, and rock wallabies, which should give some clue as to the vastly different habitats these creatures call their own. Their smaller size lets them fill smaller, more varied niches than their larger cousins.

The typical kangaroo design of large, muscular hind legs and smaller forelimbs is nearly reversed in tree kangaroos, since they are climbers rather than hoppers, and they have a long, flexible tail that helps with balance. Most tree kangaroos are found in the dense rain forest canopies of New Guinea, while two species are native to Australia. Like their ground-dwelling relatives, tree 'roos are herbivores and leave their trees at night to eat vegetation and grubs. The major threats to endangered tree kangaroos are loss of habitat, being struck by cars, and being killed by dogs and/or dingoes.

Have to have a habitat: Red kangaroos and gray kangaroos are found in Australia’s savannas and open woodlands. Tiny short-nosed rat-kangaroos or bettongs live in burrows in arid scrubland. Rock wallabies live on almost vertical rock walls in the southern desert. Tree kangaroos, as you might guess, are found high in the rain forest canopy in New Guinea and Australia, while musky rat-kangaroos scamper through the dense, wet understory below. Red-necked wallabies live in many habitats, including the icy peaks of Tasmania's mountains, and quokkas are found only on two windblown islands off Australia’s southwestern coast. The three largest kangaroo species are so adaptable that they are often found living in public parks, suburban gardens, and even on golf courses!

Macropods are herbivores, eating a wide range of plants. In fact, large kangaroos are the Australian equivalent of bison, deer, and cattle. All macropods use their hands to pull down branches to reach leaves and have a chambered stomach that works much like the stomach of ruminants like goats and sheep. They can bring the vegetation they've recently swallowed back up from one chamber, chew it as cud, and then swallow it again for final digestion. Larger kangaroos tend to feed in mobs, though the group size depends on the amount and quality of food that is available.

Most kangaroos and wallabies are grazers, clipping grasses with their teeth as they roam the Australian savanna. Tree kangaroos, however, eat what’s handy for them: leaves, flowers, ferns, moss, and insects.

A group of kangaroos is called a mob, a troop, or a herd. They are very social animals. Think of a kangaroo's famous jabbing and boxing behavior as macropod sign language. Those who study kangaroos say the jab is just one part of a whole vocabulary of glances, hisses, avoidance hops, kicks, punches, gentle touches, and grooming. Recently, behaviorists have discovered that the steps kangaroos take to get to know one another mirror the development of friendship in baboons!

Female kangaroos, called does, and their relatives give birth to tiny, underdeveloped young, called joeys, that are then carried in a special pouch—the marsupium, on the doe's body. Inside the pouch, the joey attaches to a nipple and nurses for several months before venturing out into the world. Joeys often peek their head out of the pouch to have a look around weeks before they head out on their own.

Does the joey eliminate (pee and poop) in the pouch? Yes, indeed! When it is very small, the joey doesn’t produce much, and when it gets bigger, some is absorbed through the pouch lining. The pouch can get kind of smelly, though, so the mother cleans out her pouch from time to time.

From our earliest years, the San Diego Zoo has had red and gray kangaroos, and a variety of wallaby species. In 1960, we received our first tree kangaroos as a gift from the Taronga Zoo in Australia.

The Safari Park's new Walkabout Australia, which opened in May 2018, allows guests to walk along a pathway into a grassy habitat among gray kangaroos and red-necked wallabies. Walkabout Australia also features Matschie's tree kangaroos that show off their agility leaping from branch to branch and shimmying up and down tree trunks.

Both the Zoo and San Diego Zoo Safari Park have macropods serving as animal ambassadors, too.

In 1965, workers on Kawau Island (near Auckland, New Zealand) were attempting to reduce a population of tammar wallabies Macropus eugenii that had been introduced to the island years earlier and were now overrunning the place. They were astonished to discover that some of the animals were not tammar wallabies at all but a miraculously surviving population of parma wallabies Macropus parma, a species thought extinct since the 1890s! The tammar wallaby reduction effort was halted while the parma wallabies were caught and sent to managed-care facilities in Australia and around the world, in the hope that they would reproduce and could eventually be reintroduced to their native habitat.

The renewed interest in the parma wallaby produced another surprise: a few years later, a small population of them was discovered in the forests of New South Wales in Australia!

7 to 18 years, depending on species

Number of young at birth: Usually 1; sometimes up to 4, depending on species

A female kangaroo is called a doe, flyer, jill, or roo; a male is called a buck, boomer, jack, or old man.

Honey possum newborns are the smallest of all mammal babies at less than a quarter-inch (5 millimeters) long.

Tree kangaroos are the only kangaroos that can move their back legs independently of one another and move backward, which is how they climb down a tree.

A mother kangaroo can produce milk of two different types to feed two different babies at the same time: one that has emerged from the pouch but is still nursing and a newborn.

The red kangaroo is the fastest jumper in mammal land, bouncing up to almost 35 miles (56 kilometers) per hour. 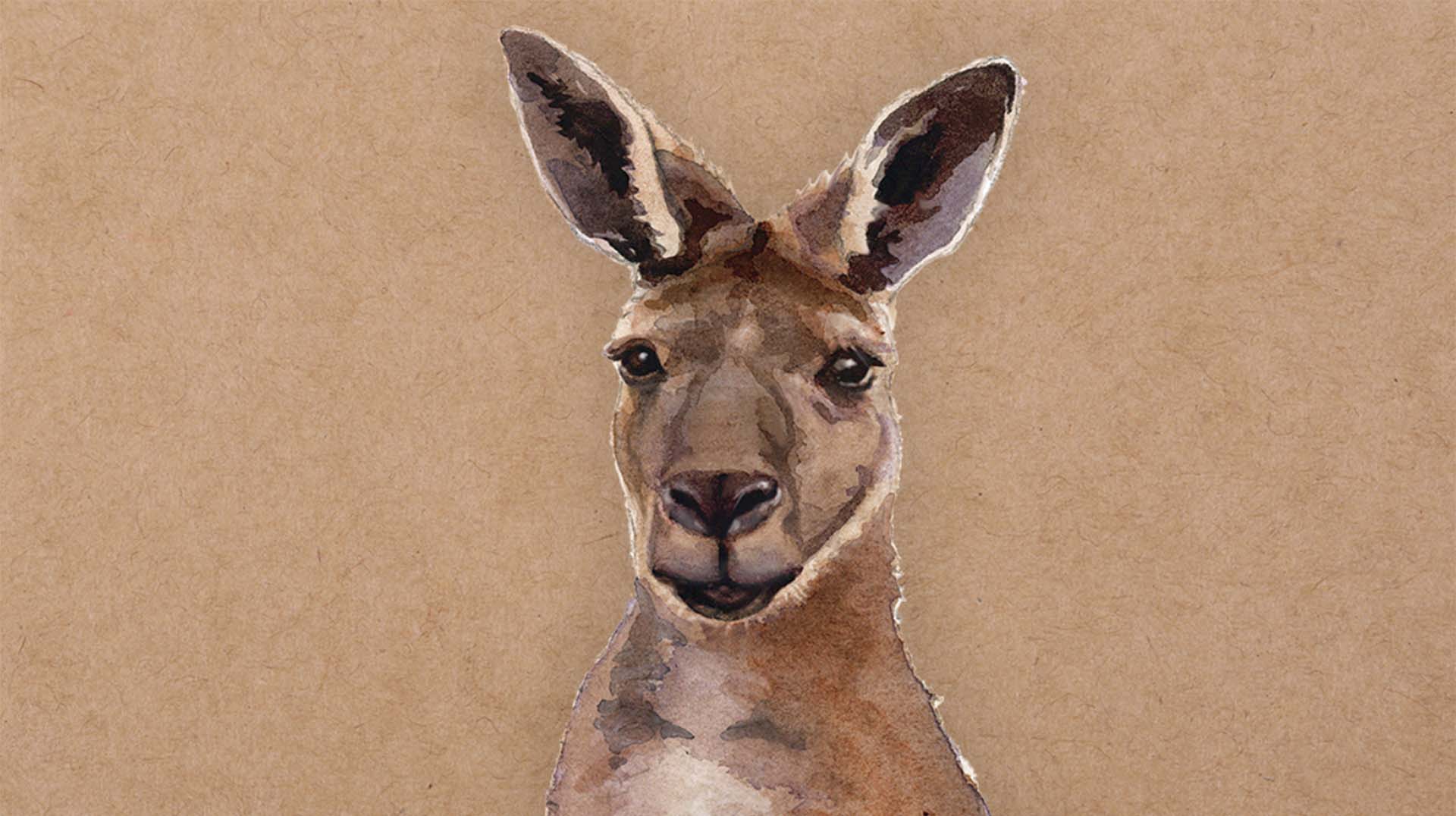 Say G'day to Kangaroos and Kin

In general, the term “kangaroo” refers to large macropods and “wallaby” refers to small and medium macropods—but some go by other names, too...