The babirusa has been called "a wild pig with a dental problem." They have remarkable tusks or canine teeth that can grow right up through the skin in their snout and curve back toward their forehead. The word babirusa means “pig deer” in the Malay language, as their wild-growing tusks are reminiscent of deer antlers.

One of these pigs is not like the others. There are four different types of babirusas. The North Sulawesi babirusa is most famous for its interesting upper tusks, which only the males possess, but both sexes have lower tusks. Like many pigs, the male babirusa’s canine teeth will continue to grow throughout its entire life as long as there is a blood supply—a lot like our fingernails and our hair. The lower canine teeth are long and overlap the edge of the babirusa’s snout as they grow, but it’s the upper canines that are truly distinctive. These teeth start out growing downward, but then curve back around and begin to grow up and into the top of the snout. If they are not worn down or broken off during fights with other males, they will penetrate the skin and begin curving back toward the animal’s forehead. The tusks can reach up to 12 inches long and can actually grow all the way back into the skull. Ouch!

What are those tusks for? The real reason remains a mystery. An early hypothesis was that the males use their tusks during fights over females. Or perhaps the tusks serve as protection of the face and eyes from the slashing lower tusks during an altercation. It seems reasonable, until a babirusa tussle is observed. Instead of tangling up their tusks, the animals rise up on their hind legs and “box” each other with their front hooves. Unlike elephant tusks, babirusa tusks aren’t built to withstand much pressure; they are fragile and not well suited for combat.

Perhaps the tusks serve as a display purpose to females, signaling genetic fitness, which females choose in a mate, which drives the crazy growing of the male’s tusks (like the male peacock’s ornate tail). This is an idea that hasn’t been tested, so the purpose of those elaborate tusks is still a mystery.

Look at that! Babirusas have barrel-shaped bodies with deer-like legs and bristly skin. They are a dull gray or brownish in color and appear naked or hairless. They are about 2 feet tall and 3 feet long and can weigh over 200 pounds. 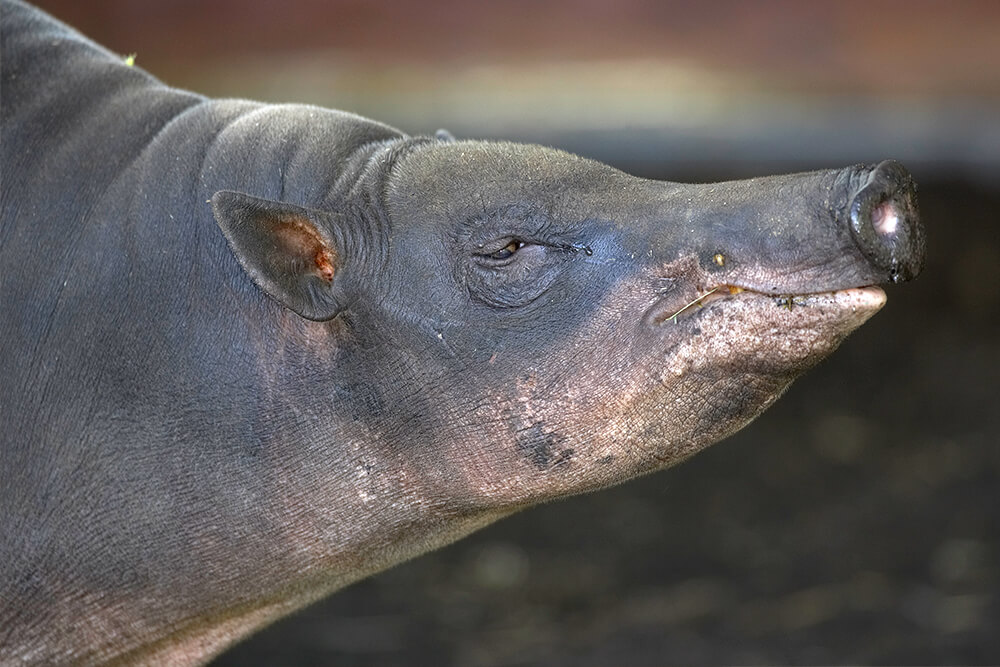 Don't drain the swamp. Babirusas live in swamps in the rain forest of Indonesia—specifically the Indonesian islands of Sulawesi, Togian, Sula, and Buru—and are found nowhere else in the world.

Let's pig out! Babirusas will eat almost everything. These omnivorous pigs consume leaves, fruits, berries, nuts, mushrooms, bark, insects, fish, and small mammals (even smaller babirusas!). They use their specialized hooves to dig for insect larvae and roots in the ground and can also stand on their two hind legs and forage on leaves high in the trees—very similar to a gerenuk in Africa.

At the San Diego Zoo, we provide our babarusas with grass or hay, bok choy, lettuce, carrots, and other types of vegetables and fruits. 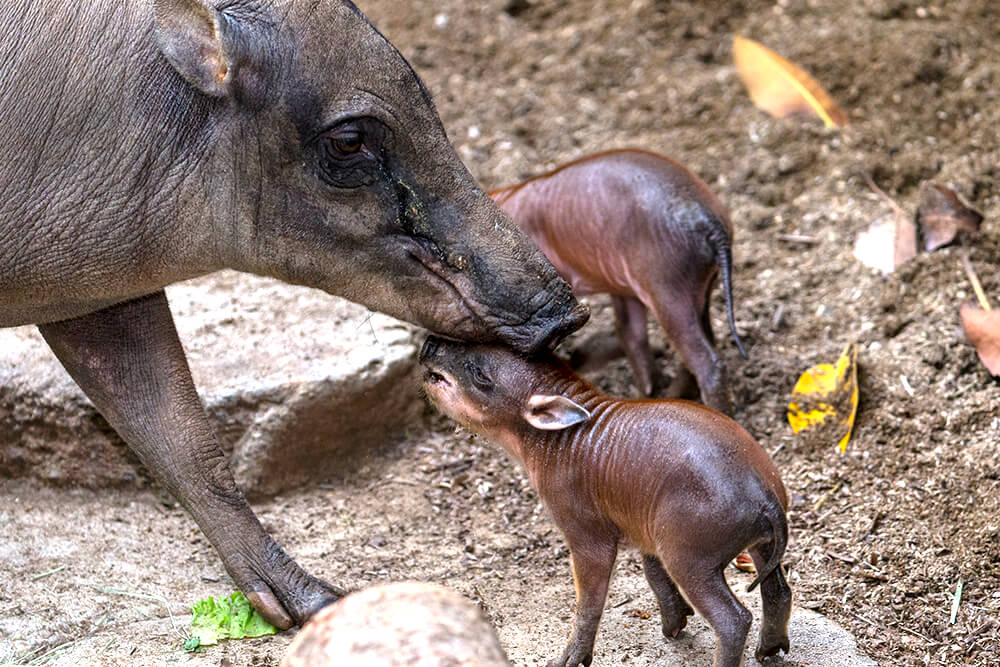 In the wild, male babirusas tend to live in solitary or in bachelor herds of two to three males, while females can be found in groups of up to eight individuals with young. They spend the majority of the day roaming and foraging throughout the forest. Little is known about this shy, forest-dwelling pig’s habits in the wild. Based on observation of captive animals, the babirusa appears to be mostly diurnal—active during the day and sleeping at night. When not foraging, they may wallow in the mud or just lie down and rest during the heat of the day.

The babirusa lives in a predator-free environment but, unfortunately, humans are the main threat to this species.

Babirusas communicate through grunts and moans, and clattering teeth. They also engage in an unusual “ploughing” behavior. Given soft sand, captive babirusas (primarily males) will kneel down on their chest and push their heads forward through the sand, while vocalizing and producing foamy saliva. As the babirusa appears to eat the sand as it plows through, it’s believed the behavior has some sort of scent-marking function, although the exact purpose remains a mystery.

Baby Babirusa. These animals become sexually mature after they reach one or two years of age. Mating season occurs from January to August; fights between rival males precede mating. Gestation in females lasts 155 to 158 days and ends with one or two piglets (which is a small litter for pigs) and they lack stripes on their skin. This reduced litter size and lack of camouflage is often attributed to the babirusa’s predator-free environment. Piglets nurse for the first six to eight months of life. They typically begin to explore their environment and enrich their diet with solid food at about 10 days old. The piglets develop quickly.

San Diego Zoo currently has babirusas near Treetops Way at the beginning of Tiger Trail. There are babirusas at the San Diego Zoo Safari Park in Nairobi Village.

The wild population of babirusas is estimated to be less than 10,000. The babirusa is listed as Vulnerable on the International Union for Conservation of Nature (IUCN) Red List of Threatened Species, due to poaching and habitat loss. They are protected in Indonesia and poaching is illegal, in most cases. However, hunting remains a significant threat to the babirusa.

Number of young: 1 to 2 piglets

In Indonesia, the striking appearance of the babirusa has inspired art and masks. 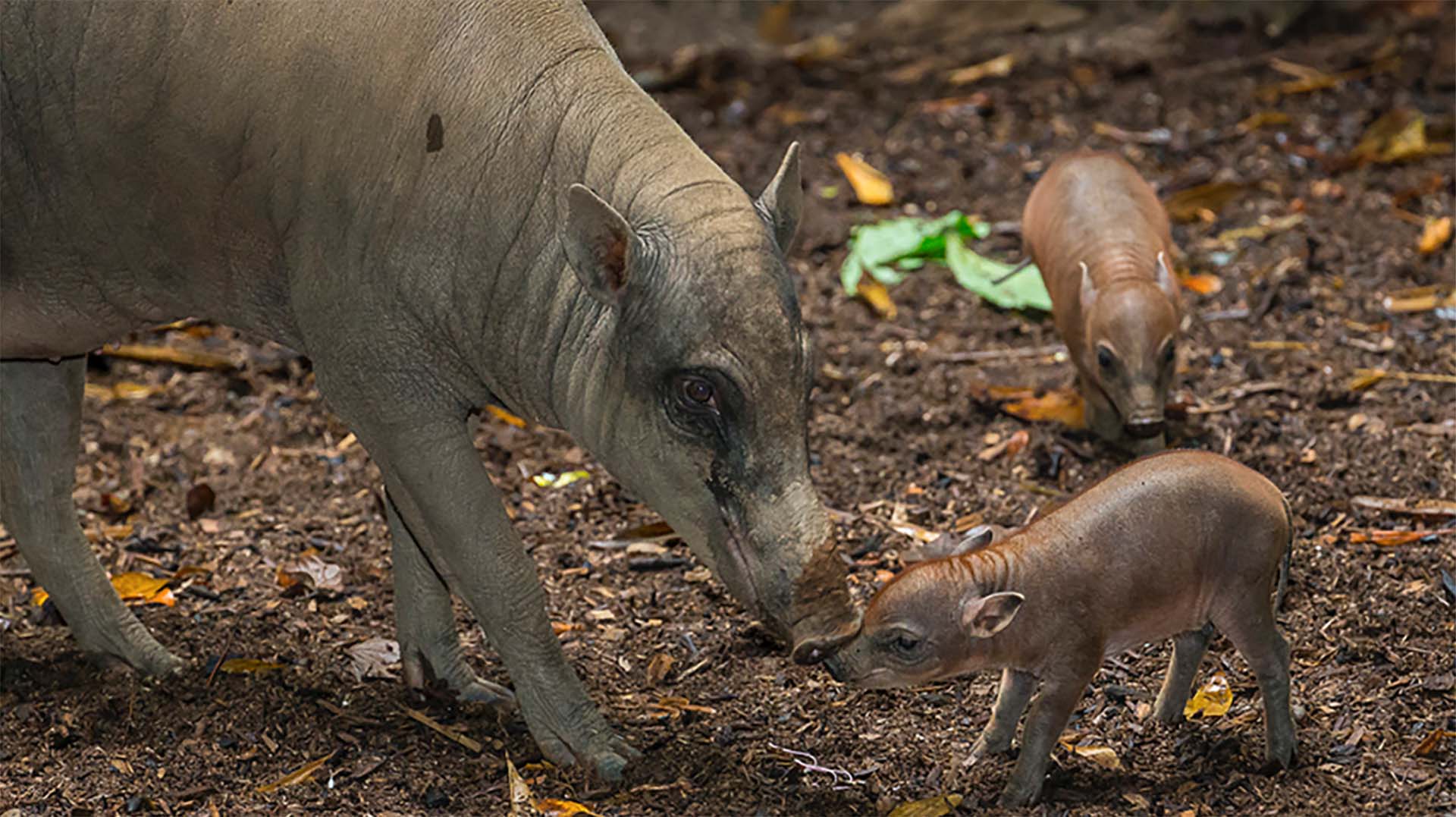